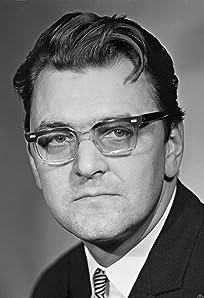 Yuri Yakovlev is a popular Russian actor best known for his roles in Soviet comedies 'Ironiya sydby', Ivan Vasilevich', and Kin-dza-dza! (1986).He was born Yuri Vasilevich Yakovlev on April 25, 1928, in Moscow, Soviet Union. His father, Vasili Vasilevich Yakovlev, was a layer, and his mother, Olga Mikhailovna Ivanova, was a homemaker. Young Yakovlev was fond of acting and theatre. From 1948 - 1952 he studied acting at Shchukin Theatrical School of Vakhtangov Theatre in Moscow.Since 1952 Yuri Yakovlev has been member of the troupe at Vakhtangov Theatre in Moscow. There his stage partners were such actors as Mikhail Ulyanov, Ruben Simonov, Boris Zakhava, Mikhail Astangov, Varvara Popova, Irina Kupchenko, Natalya Tenyakova, Yuliya Borisova, Lyudmila Maksakova, Lyudmila Tselikovskaya, Marianna Vertinskaya, Nina Ruslanova, Nikolai Plotnikov, Vasiliy Lanovoy, Vladimir Etush, Vyacheslav Shalevich, Andrei Abrikosov, Grigori Abrikosov, Boris Babochkin, Nikolai Gritsenko, Nikolai Timofeyev, Aleksandr Grave, Evgeniy Karelskikh, Sergey Makovetskiy, and Ruben Simonov, among others. His most memorable stage performances were such roles as Triletsky in 'Play without a title', a play by Anton Chekhov (1968), as Karenin in 'Anna Karenina' (1983) by director Roman Viktyuk, and the title role in 'Kasanova' (1985). Since taking the role as Pantalone in 1963, Yakovlev has been delivering acclaimed performances in the legendary Vakhtangov's production of Carlo Gozzi's comedy 'Princess Turandot'.He shot to fame with the leading role as Prince Myshkin in _The Idiot (1958)_ by director Ivan Pyrev. During the 1960s - 1980s Yakovlev was among the most popular actors in the Soviet Union. He was best known for such roles as Ivan Vasilyevich Bunsha in Iwan Wassiljewitsch wechselt den Beruf (1973) by director Leonid Gaidai, and as Ippolit in Die Ironie des Schicksals, oder Genieße Dein Bad! (1975) by director Eldar Ryazanov.Yuri Yakovlev was designated People's Actor of the USSR, was awarded the State Prizes of the USSR and Russia. He received the Order of Lenin (1988), the Order of the Red Banne of Labour (1978), and numerous awards and decorations for his works on stage and in film. He is married to Irina Leonidovna Sergeeva, and the couple has two sons and a daughter. Outside of his acting profession Yakovlev is fond of reading classical Russian literature and listening to classical music together with his friends and family.In 1997 Yakovlev published his book titled 'Albom sudby moyey' (aka.. The album of my destiny). He is living with his family in Moscow, Russia. - IMDb Mini Biography By: Steve Shelokhonov

Apple iTunes has the most number of Yuriy Yakovlev’s flixes compared to other streaming platforms. See the full graph below.

On average the IMDB score of the movies that Yuriy Yakovlev has worked on is 7.0.

An ordinary Soviet building manager, living in the 20th century, is extremely similar to a Tsar of All Rus' - Ivan IV the Terrible (1530-1584). He would never have known about this, but one day his neighbor created a time machine.

Two Russians push the wrong button on a strange device and end up on the telepathic planet Pluke with its strange societal norms.