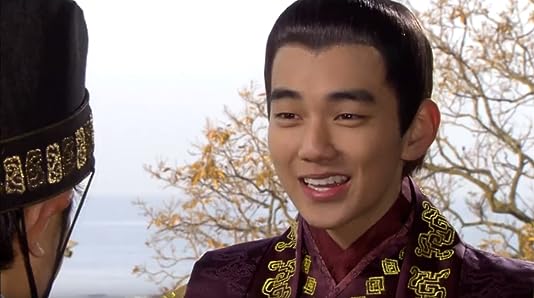 Yoo was born in Incheon and raised there by his family and the younger of two siblings. He made his entertainment debut in a cellphone commercial in 1999 after his mother sent in a photo of her son to an ad agency.In 2000, Yoo began his career as a child actor, first appearing in television dramas. He rose to stardom in his first film The Way Home, playing a bratty city boy who learns to appreciate country life when he's forced to spend the summer with his deaf-mute grandmother. The low-budget film was a surprise box office hit in 2002, drawing more than 4 million admissions.He was then affectionately labeled as "Nation's Little Brother". Thereafter, he also starred in animal movie Heart Is... (2006) about a boy and his beloved dog, and Unforgettable (2008) about school children from a remote island who go on a field trip to a candy factory in Seoul during the 1970s. He continued acting in television, appearing in Magic Warriors Mir & Gaon (2005), an adventure series for children. Yoo further built his filmography, playing younger counterparts of male protagonists in television dramas, including general Yi Sun-sin in Immortal Admiral Yi Sun-sin (2004), King Seongjong in The King and I (2007), and Gwanggaeto the Great in The Legend (2007).In 2009, he starred in the films City of Fathers and 4th Period Mystery. He also appeared as Kim Chunchu in the period epic Queen Seondeok.In his teens, Yoo was cast in one of the major roles in Master of Study (2010), a Korean screen adaptation of Japanese manga Dragon Zakura. He then played a more mature role in Flames of Desire, as the second-generation son of a wealthy chaebol family who is uninterested in the battles of succession among his relatives and becomes a married man at 21. Later that year, Yoo sang a duet with singer/actress IU titled "Believe in Love" for the charity program Love Request. The song's lyrics was based on a diary that Yoo had written while seeing orphans of war in the slums of Sri Lanka.In 2011, Yoo trained in swordplay and martial arts in his role as an assassin in Warrior Baek Dong-soo, an action-period drama based on the manhwa by Lee Jae-Hun. He was also one of the voice actors for Leafie, a Hen into the Wild, which was adapted from a bestselling children's novel by Hwang Sun-Mi. He then co-starred with Kim Ha-Neul in the thriller Blind. In 2012, Yoo was cast in his first role as a leading man in Operation Proposal, a Korean remake of the Japanese drama Proposal Daisakusen.This was followed by a supporting role as the Jade Emperor, ruler of the heavens, in the fantasy-period drama Arang and the Magistrate. Afterwards, he starred in the melodrama Missing You, playing a cold man who hides a vengeance-filled heart behind his seemingly gentle smile. Known in the press as "Little Ji-seob So"for his resemblance to the said actor, in 2013 Yoo starred in the music video for So's single "Eraser" together with Park Shin-Hye. This was his second time promoting So's musical endeavors, after "Lonely Life" in 2008.Following that, Yoo's first photo book titled Travel Letter, Spring Snow, And... was published; it was the last project shot by celebrity photographer Bori before her death on 9 April 2013. Yoo enlisted for his mandatory military service as a regular soldier on March 5, 2013 without media fanfare, where he reportedly worked as a trainer of new recruits. He drew praise for doing so at age 19, unlike most male Korean celebrities who choose to delay their enlistment until they turn 29. Yoo was discharged on December 4, 2014. As his first post-army project, Yoo appeared in the music video for Naul's "You From the Same Time" in 2015. He was next cast as a stubborn webcomic writer raising a cat in the TV adaptation of webtoon Imaginary Cat. Yoo followed this by starring in the Joseon-era romance film The Magician directed by Kim Dae-Seung, in which he plays a circus magician who falls in love with a princess. Yoo was then cast in SBS's legal thriller series Remember-War of the Son as a lawyer with hyperthymesia who defends his father on death row.In 2016, Yoo starred in Seondal: The Man Who Sells the River as the titular Kim Sun-Dal. The film received positive reviews for its effective use of satire, and was a solid mid-level hit in Korea. In October 2016, Yoo was announced to be starring in MBC's historical melodrama Ruler: Master of the Mask, playing Crown Prince Lee Seon. The drama is slated for a 2017 release. - IMDb Mini Biography By: Anonymous

Rakuten Viki has the most number of Yoo Seung-ho’s flixes, followed by Kocowa compared to other streaming platforms. See the full graph below.

On average the IMDB score of the movies that Yoo Seung-ho has worked on is 7.3.

Historical drama centered on the famous Korean Admiral Yi Soon-Shin (1545-1598), who saved Korea and China from conquest by Japan in a string of brilliant naval victories. Yi used iron-clad...

Kim Min Gyu has wealth and success, but lives an isolated life due to his allergy of people. He then meets and falls in love with a girl who is pretending to be a robot for her ex-boyfriend, a genius robots professor.

Childhood friends Baek Dong Soo and Yeo Woon are both prodigies in combat. But while Baek Dong Soo became the top swordsman in the land, Yeo Woon would go on to serve a group of clandestine assassins whose aim is to overthrow the throne.

A son's innocent father accused of a crime he didn't commit.

Based on the hit webtoon of the same name, "Memorist" is a mystery thriller that tells the story of Dong Baek, a detective with supernatural powers.

Seven-year-old Sang-woo is left with his grandmother in a remote village while his mother looks for work. Born and raised in the city, Sang-woo quickly comes into conflict with his ...

The drama revolves around a guy and a girl, who both experience a painful end to their first loves at the tender age of 15, and then meet again as adults by playing game of love hide and ...

When Kang Bok Soo was a high school student, he was falsely accused of committing violence and kicked out of school. This was caused by his first love Son Soo Jung and a male student Oh Se ...