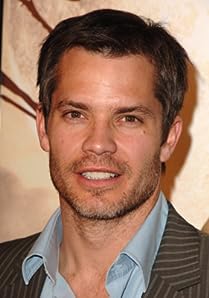 From Timothy Olyphant's first screen appearances, such as his two-minute bit in The First Wives Club (1996), to "Nicko", whose presence at times dwarfed the island in A Perfect Getaway (2009), he has been a force to be reckoned with.Born in Hawaii, Timothy David Olyphant was raised in Modesto, California. He is the son of Katherine Lyon (Gideon) and John Vernon Bevan Olyphant, a college teacher who was also an executive at E & J Gallo Winery. He has an older brother, Andy, who is in A&R for Warner Bros. Records, and a younger brother, Matt Olyphant, who was the lead singer for the punk rock group, Fetish, and is also an artist. He is a descendant of the prominent Vanderbilt and Olyphant families of businesspeople, and his ancestry includes Russian Jewish (from a maternal great-grandfather), English, German, Scottish, Dutch, and Irish. Timothy quickly became Modesto's favorite son, competing as a pro swimmer and excelling at drawing. It was, by chance, that he enrolled in an acting course as an elective and decided to pursue an acting career. He took his family and headed to New York City, where he studied the craft and began auditioning for roles. From the beginning, he tried to choose diversified roles and take chances with every genre and always approached everything he did with commitment, humor and grace. Timothy is married to his college sweetheart, Alexis Knief, and, together, they raise three children, one son and two daughters in California. He has managed to keep his personal life out of the tabloids. He obviously has his priorities straight, as this is no easy task in Hollywood.Highlights of Olyphant's career include his riveting portrayal of "Sheriff Seth Bullock" in HBO's hit drama, Deadwood (2004). He now personifies intensity as complex Kentucky Marshal, "Raylan Givens", in FX's Justified (2010). On the big screen, in 2010's The Crazies (2010), he had the chance to infuse his character with doubts, fears and humaneness in an inhumane situation. Mr. Olyphant proved he could carry a major movie on his talent, alone. He recently appeared in I Am Number Four (2011), a Steven Spielberg sci-if thriller, in which Tim provided the adult mentorship, taking a back seat to the teen cast. - IMDb Mini Biography By: sandra seymour

Amazon Video has the most number of Timothy Olyphant’s flixes, followed by Google Play Movies compared to other streaming platforms. See the full graph below.

On average the IMDB score of the movies that Timothy Olyphant has worked on is 6.7.

A show set in the late 1800s, revolving around the characters of Deadwood, South Dakota; a town of deep corruption and crime.

Before cowboys and before the Gold Rush, there were the original outlaws of the West -- the truly untamed animals that call America home. Elephant seals settling their scores with blood; ...

Rango is an ordinary chameleon who accidentally winds up in the town of Dirt, a lawless outpost in the Wild West in desperate need of a new sheriff.

An insight into the turbulent lives and loves of a gay clique based in Los Angeles.