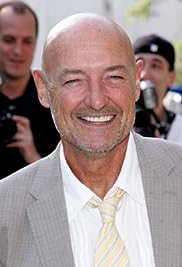 Terrance Quinn (born July 15, 1952), known professionally as Terry O'Quinn, is an American actor. He played John Locke on the TV series Lost, the title role in The Stepfather and Stepfather II, and Peter Watts in Millennium, which ran for three seasons (1996-1999). He has also hosted Mysteries of The Missing on The Science Channel.O'Quinn was born at War Memorial Hospital in Sault Ste. Marie, Michigan, one of 11 siblings, and grew up in nearby Newberry, Michigan. He is of Irish descent, and was raised Roman Catholic. He attended Central Michigan University in Mount Pleasant, Michigan, and the University of Iowa in Iowa City. He changed his surname from Quinn to O'Quinn as another registered actor already had the name Terrance Quinn.In the 1970s he came to Baltimore to act in the Center Stage production of Tartuffe. He remained at Center Stage for some years and often appeared with the late Tana Hicken, most notably as Benedick to her Beatrice in Much Ado About Nothing. His first movie role was in Heaven's Gate.O'Quinn began acting in the 1970s during his time at Central Michigan University. He not only was an actor but also playwright/director. He wrote and directed the musical Orchestrina. This musical featured five main characters: The Man (played by Jeff Daniels), The Boy (Harold Downs), The Woman (Ann O'Donnell), The Girl (Debbie Penwarden), and The Drunk (James Hilliker), plus a female and a male chorus. He was roommates at CMU with actor Brad Slaight.Starting in 1980, O'Quinn has appeared in various feature films such as Silver Bullet, Tombstone, Heaven's Gate, Young Guns, alongside Rutger Hauer in Blind Fury, and as Howard Hughes in The Rocketeer.O'Quinn also appeared in the Canadian horror movie, Pin (1988) alongside British-born Canadian actor, David Hewlett.His early television roles include guest appearances on Miami Vice (episode "Give a Little, Take a Little"), Moonlighting, Star Trek: The Next Generation (episode "The Pegasus"), The Twilight Zone (1985 revival; episode "Chameleon"), Homicide: Life on the Street (episode "Hate Crimes"), a recurring role on Earth 2, another recurring role as Captain (& later Rear Admiral) Thomas Boone on JAG, as well as Colonel Will Ryan in episode 15 of season 1 on the JAG spin-off series NCIS (episode "Enigma").Around 1995, O'Quinn made guest appearances in The X-Files and Harsh Realm, produced by Chris Carter, who also cast him in the film The X-Files: Fight The Future and then once again in the final season. In 1996 O'Quinn started acting in the television series Millennium as Peter Watts, also produced by Chris Carter. O'Quinn held this role for all three seasons of the series. O'Quinn holds the distinction of having played four different characters within the extended X-Files/Millennium continuum (the two shows being classed together since both Lance Henriksen's character of Frank Black and Charles Nelson Reilly's character of Jose Chung have appeared in both shows). - IMDb Mini Biography By: ahmetkozan

Amazon Video has the most number of Terry O'Quinn’s flixes, followed by Vudu compared to other streaming platforms. See the full graph below.

On average the IMDB score of the movies that Terry O'Quinn has worked on is 6.4.

The survivors of a plane crash are forced to work together in order to survive on a seemingly deserted tropical island.

Follows the complicated life of intelligence officer John Tavner, whose latest assignment - to prevent Iran from going nuclear - requires him to forgo all safety nets and assume a perilous non-official cover.

This program is made by the Discovery Network, and the show's 'full-name' has the suffix phrase of "The Questions of Our Life", after curiosity. The show tries to answer mysteries and ...

James, a young grifter, attempts to prey upon Pastor Byron Brown, who turns out to be far more dangerous than he suspects. A cast of Coen brothers-type characters complicate their plans to outplay each other.

Every villain has a noble cause, and every hero has a dark side. In the gritty new action-drama GANG RELATED, Detective RYAN LOPEZ is a rising star in Los Angeles' elite Gang Task Force. ...

Documentary
Mysteries of the Missing (2017)

A documentary series that exposes the theories behind what happened on the fateful day of disappearances and what science can now tell us about these events with Terry O'Quinn as a host.

A temperamental figure skater and a former hockey player try to win Olympic gold as a figure skating pairs team.

After murdering his entire family, a man marries a widow with a teenage daughter in another town and prepares to do it all over again.