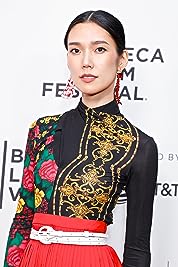 Tao Okamoto born in Chiba, Japan on May 22, 1985, known professionally as Tao, is a Japanese actress and model. In 2009, she was one of the faces of Ralph Lauren. She made her film debut in 2013 as Mariko Yashida, the female lead, in The Wolverine (2013). She also had recurring roles in the television series Hannibal (2013), The Man in the High Castle (2015) and Westworld (2016). . She started modeling as a teenager in Japan, when she was 14 years old. In 2006, she made a decision to move to Paris and develop her career on an international level. Soon after that, Tao made her debut on the European runways, breaking barriers as one of the very few prominent East Asian models of that era. Through her long catwalk career, she has walked for numerous top brands, including Alexander Wang, Chanel, Dolce & Gabbana, Fendi, Louis Vuitton, Michael Kors, Miu Miu, Ralph Lauren, and Yves Saint Laurent. In 2009, Tao moved to New York City and made waves in the industry by donning a unique bowl haircut. It became an inspirational look and even prompted designer Phillip Lim to model the hairstyle of his entire Fall/Winter 2009 show's cast after Tao's cut.] Tao has been involved with various advertising and editorial projects. She has fronted campaigns such as Dolce & Gabbana with Mario Testino, Emporio Armani by Alasdair McLellan, Kenzo with Mario Sorrenti, and Tommy Hilfiger with Craig McDean. Editorially, she has shot for i-D Magazine, V Magazine, W Magazine, and various international editions of Harper's Bazaar and Vogue. The November 2009 issue of Vogue Nippon (Japanese Vogue) is dedicated to Tao, with her featured exclusively inside as well as on the cover - the first Japanese model to do so in nearly a decade. Tao is widely recognized as one of the top models to ever come from Japan, having won honors such as "Model of the Year" from the Japan Fashion Editor's Club and being dubbed as one of Vogue Nippon's "Women of the Year" in 2010. In 2013, Tao made her film debut as the female lead, Mariko Yashida, opposite Hugh Jackman, in 20th Century Fox's The Wolverine (2013), also known in some parts of Asia as Wolverine: Samurai. In October 2014, it was announced that Tao had joined the cast of Hannibal (2013) as Chiyoh, Hannibal Lecter's family servant. In January 2015, it was announced that Tao would be starring in the film Kurosurôdo (2015) with Filipino actress/cosplayer Alodia Gosiengfiao In 2015, Tao starred in The Man in the High Castle (2015) as Betty Kasoura, wife of lawyer Paul Kasoura and a customer at Robert Childan's American Artistic Handcrafts. Tao played Mercy Graves in the 2016 film Batman v Superman: Dawn of Justice (2016). - IMDb Mini Biography By: Sam013024

Vudu has the most number of Tao Okamoto’s flixes, followed by YouTube compared to other streaming platforms. See the full graph below.

On average the IMDB score of the movies that Tao Okamoto has worked on is 4.9.

Wolverine comes to Japan to meet an old friend whose life he saved years ago, and gets embroiled in a conspiracy involving yakuza and mutants.

A beautiful Japanese madam and her ladies. A deranged, drug-addled Tokyo gangster and his crew. A sadistic serial killer on the loose. The intersection of these stories, and the interior ...

Garrett, an emotionally-troubled young man, is sent to a clinic, whispering soothing promises of perfection. By planting characteristics directly into his own body, he's relieved of his dark visions, but pays the price for purity of mind.