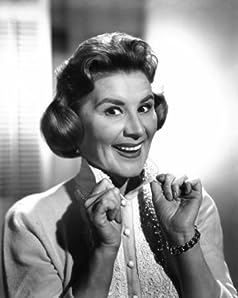 Rose Marie was a legend of show business, with a career stretching 90 years, since her debut as her self in a Vitaphone musical short that appeared on the bill with The Jazz Singer (1927) at its premiere in 1927. According to Rose Marie, when she approached Al Jolson at The Wintergarden Theater in New York on the night of the premiere that made movie history and told him, "You were wonderful, Mr. Jolson!", his reply was, "Get away, you little brat!""He didn't like kids," Rose Marie explained. Her first credited appearance was in another musical short, Baby Rose Marie the Child Wonder (1929) in 1929.The legendary performer was born Rose Marie Mazetta on August 15, 1923 in New York City, the daughter of an Italian-American father, Frank Mazetta (known as Frank Curley), and Polish-American mother, Stella (Gluszcak). Blessed with a remarkable singing voice for a child that allowed her to belt out jazz songs in the "coon shouter" style of the 1920s (as exemplified by Sophie Tucker), she began performing when she was three years old as "Baby Rose Marie." By the time she was five, she had her own radio show on NBC, appearing after 'Amos and Andy' (1949)_, the most popular show in the country. Many people could not believe the voice they were hearing actually belonged to a child.Baby Rose Marie made many appearances in films in the 1930s, most famously in International House (1933), a movie about television, the medium in which Rose Marie would win her everlasting fame. In addition to her film performances, Baby Rose Marie also appeared on records and performed in vaudeville as a headliner. One of the acts she appeared with was Edgar Bergen before his Charlie McCarthy ventriloquism act, when he was still a small-timer. A half century later, when she appeared on Murphy Brown (1988), she told star Candice Bergen, "I worked with your father in vaudeville when he was doing a doctor sketch."When Bergen replied that she couldn't have played the nurse in the act as she was too young, Rose Marie told her that she was the headliner and he was her opening act. "She didn't care for that too much," Rose Marie remembered.She also appeared in vaudeville with Dick Powell, Rudy Vallee and Jimmy Durante, who mentored her. She also entertained at the White House three separate times at the request of three presidents. They were Calvin Coolidge, Herbert Hoover and Franklin D. Roosevelt.She transitioned to becoming a nightclub chanteuse as a teenager, playing all the big night clubs and hotels in New York, Chicago, Atlantic City, Las Vegas and Miami, Florida, usually in Mob-controlled venues. (Prominent mobsters, who called her "The Kid", liked her and protected her.) A young Milton Berle, whom she had known since she was a child, wrote some of her material, as did Morey Amsterdam, her future "Dick Van Dyke" co-star whom she knew since she was nine years old.After the war she married trumpeter Bobby Guy of the Kay Kyser Orchestra, in 1946. She made her Broadway debut in 1951, co-starring with Phil Silvers in the hit show Top Banana (1954) (she also appeared in the 1954 film adaptation). Rose Marie also appeared on radio on "The Phil Harris - Alice Faye Show", playing the sister of Sheldon Leonard, who would later hire her for The Dick Van Dyke Show (1961) in his capacity as executive producer.Rose Marie had a career resurgence as an actress in the 1960s, starring in three sit-coms during the decade: First, My Sister Eileen (1960) in the 1960-1961 season. Second: as comedy writer "Sally Rogers" on The Dick Van Dyke Show (1961) from 1961 to 1966, and on The Doris Day Show (1968) from 1969 to 1971. She also appeared frequently on The Hollywood Squares (Daytime) (1965). She was the center square at least once, and had a recurring role on Murphy Brown (1988) and Wings (1990). She appeared in a Remington Steele episode "Steele in the Spotlight (1986).She also kept her singing career going, touring as part of the musical revue "4 Girls 4" from 1977 to 1981 with Rosemary Clooney, Helen O'Connell and Margaret Whiting. In her latter years, she continued to make occasional appearances.She died on December 28, 2017 in Van Nuys, California, at 94 years old. - IMDb Mini Biography By: Jon C. Hopwood

Amazon Video has the most number of Rose Marie’s flixes, followed by Vudu compared to other streaming platforms. See the full graph below.

On average the IMDB score of the movies that Rose Marie has worked on is 6.7.

Biography,Comedy,Documentary
Wait for Your Laugh (2017)

Rose Marie, the untold story of fame, love, tragedy and 90 years of American entertainment through the eyes of the woman who did it all.

The missions of a major city's police department's Special Weapons and Tactics unit.

When his natural habitat is threatened to be overrun by civilization and pollution, Yogi Bear, together with his faithful sidekick, Boo Boo Bear, and a gaggle of cartoon notables ranging ...

A lasagne-loving pussycat adventures and explores the differences between good and bad, and right and wrong.