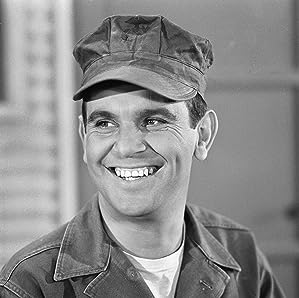 Born and raised in Richmond, California, comedian Ronnie Schell's first choice of careers was to play professional baseball. He got as far as the semis before enlisting in the Air Force, where he performed in variety shows, as both an emcee and comedian, and also did record pantomimes. He studied at San Francisco State University and, by happenstance, formed a nightclub comedy duo which took off. He turned solo within a year and progressed to Las Vegas work as an opening act. TV opened its doors to him when he nailed the regular role of Jim Nabors' Marine bunkmate, "Duke Slater", on Gomer Pyle: USMC (1964) and his acting career was born. Betwixt and between was a recurring role on That Girl (1966), playing Marlo Thomas' agent, and a short-lived series lead on Good Morning World (1967), co-starring a pre-Laugh-In (1967) Goldie Hawn. Minor supporting roles in Disney films also came his way, with The Strongest Man in the World (1975), The Shaggy D.A. (1976), Gus (1976), Katten fra verdensrommet (1978) and The Devil and Max Devlin (1981), while numerous guest parts on such shows as The Andy Griffith Show (1960), Love, American Style (1969), Charlie's Angels (1976), The Dukes of Hazzard (1979) and Saved by the Bell (1989) have kept him busy over the years. Following "Gomer Pyle", he would also appear as a regular on Nabors' variety show, The Jim Nabors Hour (1968), for a short spell. Ronnie continued to perform in comedy clubs for a time, then made fine use of his gifts as a voice artist on TV, radio, films, commercials and, especially, Hanna-Barbera cartoons. He continues to live in the Los Angeles area where, for years, he has served as the honorary mayor of Encino. - IMDb Mini Biography By: Gary Brumburgh / gr-home@pacbell.net

Vudu has the most number of Ronnie Schell’s flixes, followed by Apple iTunes compared to other streaming platforms. See the full graph below.

On average the IMDB score of the movies that Ronnie Schell has worked on is 6.9.

Animation,Comedy,Mystery
Goober and the Ghost Chasers (1973)

A dog, able to become temporarily invisible, and his human companions investigate mysteries involving the paranormal.

A Vegas show dog gets ditched in the sticks and ends up working on a farm.