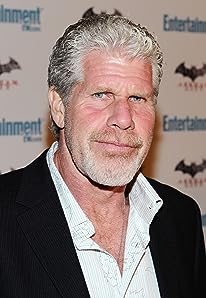 Ron Perlman is a classically-trained actor who has appeared in countless stage plays, feature films and television productions.Ronald N. Perlman was born April 13, 1950 in Washington Heights, Manhattan, New York. His mother, Dorothy (Rosen), is retired from the City Clerk's Office. His father, Bertram "Bert" Perlman, now deceased, was a repairman and a drummer. His parents were both from Jewish families (from Hungary, Germany and Poland).With a career spanning over three decades, Perlman has worked alongside such diverse actors as Marlon Brando, Sean Connery, Dominique Pinon, Brad Dourif, Ed Harris, John Hurt, Jude Law, Christina Ricci, Federico Luppi, Sigourney Weaver, Michael Wincott and Elijah Wood to name a few.While he has never been a bankable star, Perlman has always had a large fan-base. He started out strong as Amoukar, one of the tribesmen in Jean-Jacques Annaud's Academy Award-winning film Am Anfang war das Feuer (1981), for which he earned a Genie Award nomination. Perlman teamed up with Annaud again, this time as a hunchback named Salvatore in Der Name der Rose (1986). His first real breakthrough came later when he landed the role of the noble lion-man Vincent, opposite Linda Hamilton on the fantasy series Die Schöne und das Biest (1987). His work in this role earned him not only a Golden Globe Award but an underground fan following. Sadly the series was canceled in its third season shortly after Hamilton's character's death.After that, he spent time doing supporting work on television and independent films such as Guillermo del Toro's debut Cronos (1993) (where a lifelong friendship and collaboration between the director and Perlman would blossom) as Angel and his first lead role as One in Jean-Pierre Jeunet's surreal Die Stadt der verlorenen Kinder (1995). His first real big role in a mainstream film came when Jeunet wanted him for the brutish Johner in his first Hollywood outing Alien - Die Wiedergeburt (1997). Perlman has also used his distinctive voice to his advantage, appearing in many animated films/series, commercials and he is a video game fan favorite because of his work on such games as the Fallout series.It was not until much later he received worldwide fame when his good friend Guillermo del Toro helped him land the title role in the big-budget comic book movie Hellboy (2004). Del Toro fought the studio for four years because they wanted a more secure name, but he stood his ground and in 2004, after almost 25 years in and out of obscurity, Perlman became a household name and a sought out actor. Perlman has had one of the most offbeat careers in film, playing everything from a prehistoric ape-man to an aging transsexual and will always be a rarity in Hollywood.Other notable roles include the cunning Norman Arbuthnot in Last Supper - Die Henkersmahlzeit (1995), sniper expert Koulikov in Duell - Enemy at the Gates (2001), vampire leader Reinhardt in Blade II (2002), his reprisal of Hellboy in Hellboy 2 - Die goldene Armee (2008) and biker chief Clarence Morrow on the popular series Sons of Anarchy (2008).He currently resides in Los Angeles, California with his wife, Opal, and their two children, Blake and Brandon. - IMDb Mini Biography By: Pedro Borges

Amazon Video has the most number of Ron Perlman’s flixes, followed by Vudu compared to other streaming platforms. See the full graph below.

On average the IMDB score of the movies that Ron Perlman has worked on is 6.0.

A biker struggles to balance being a father and being involved in an outlaw motorcycle club.

An in depth look at the persecution and subsequent death of the 5 million non Jewish victims of the World War II Holocaust and the lives of those who survived. Through stories of survivors ...

A desperate banker, a Haitian-American gang lord and a Cuban-American hacker are forced to work together to unwittingly create their version of the American dream - organized crime 2.0.

The magically long-haired Rapunzel has spent her entire life in a tower, but now that a runaway thief has stumbled upon her, she is about to discover the world for the first time, and who she really is.

Documentary
Boris Karloff: The Man Behind the Monster (2021)

A Black samurai goes on a mission to avenge the wrongful death of his father in a futuristic feudal Japan.

Drama,Fantasy,Sci-Fi
The City of Lost Children (1995)

A scientist in a surrealist society kidnaps children to steal their dreams, hoping that they slow his aging process.

A morally-corrupt judge suffers a breakdown and believes God is compelling him onto a path of vigilante justice.