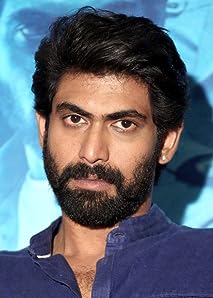 Actor, producer and entrepreneur, Rana Daggubati enjoys a very unique fandom from across the world. Perhaps best known as the vicious antagonist 'Bhallaladeva' from the record-breaking Indian franchise, Baahubali, Rana, however, began his mainstream film career as the producer of the National Award-winning film Bommalata (2004).In 2005, he set up Spirit Media, a company that specialized in VFX and animation. He thus went on work on over 70 films as a VFX co-coordinator.In 2010, he marked his acting debut with Leader, which established him as a bankable actor in the Telugu film industry. He then went on to foray into Hindi cinema, or the popular Bollywood, with Dum Maaro Dum. He subsequently acted in several Telugu and Hindi films, before his role as the lead antogonist in the 2015 film, Baahubali: The Beginning, catapulted him to new heights of stardom. The sequel, Baahubali 2: The Conclusion, became the first Indian film to hit the 1000-crore mark in box office collections. The phenomenal success of the film wasn't limited to the BO numbers, but has grown into a universe much larger than cinema, with games, manga comics, merchandising and more still in high demand.On the back of the phenomenal success of the Baahubali franchise, Rana went to earn another first with India's first underwater film, The Ghazi Attack, which was a commercial success and garnered him another prestigious National Award.Known for his off-beaten-path approach to stories, Rana's repertoire is an interesting mix of everything from playing an upright Naval officer to fantastical villain. Also a dubbing artiste, Rana is the voice behind the super villain Thanos in the Telugu Avengers version.Hailing from a family of filmmakers and storytellers, Rana Daggubati also oversees the operations of one of South India's leading production houses, Suresh Productions. When he is not busy shooting, Rana Daggubati is a thorough entrepreneur and businessman who has business interests spread across the spectrum of media an entertainment.In 2018, Rana entered into a joint venture with one of India's leading entertainment agencies, Kwan Entertainment. He also partnered with Anthill Ventures, an investment and scaling platform for early growth stage start-ups, to launch Anthill Studio, a start-up accelerator program focused on technologies such as AI, Augmented Reality and Virtual Reality (AR/VR), Blockchain, Visual Effects (VFX), Cloud Rendering, Artificial Intelligence (AI), Machine Learning (ML), Internet of Things (IoT) and Big Data and Analytics. A comic book geek, Rana also bought a stake in the one of India's leading comic book companies, Amar Chitra Katha in 2019.While his passions, interests and endeavors many seem varied, there is one thread that seems to define everything that drives Rana Daggubati - the power and glory of storytelling - a love that he has confessed to many times. - IMDb Mini Biography By: A Fan

Amazon Video has the most number of Rana Daggubati’s flixes, followed by Apple iTunes compared to other streaming platforms. See the full graph below.

On average the IMDB score of the movies that Rana Daggubati has worked on is 6.5.

When Shiva, the son of Bahubali, learns about his heritage, he begins to look for answers. His story is juxtaposed with past events that unfolded in the Mahishmati Kingdom.

In ancient India, an adventurous and daring man becomes involved in a decades old feud between two warring people.

An elite counter-intelligence unit learns of a plot, masterminded by a maniacal madman. With the clock ticking, it's up to them to track the terrorists' international tentacles and prevent them from striking at the heart of India.

A Pakistani submarine, Ghazi plans to secretly attack Vizag port. For doing so, it has to get past Indian submarine S21.

In order to fulfill his promise to his grandfather, a man acts in a play in his native village, where he stumbles upon the truth about the death of his parents.

A corrupt police officer is entrusted the task of apprehending drug-dealers.

The main plot of the series is Cyber Crime. It is about how Social Digital Media Agency, announces a contest and grabs the attention over digital media and how it helps the leads who are on...