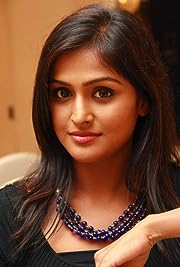 Remya Nambeeshan was born on January 1, 1986, to Subrahmaniam Unni and Jayasree. Her father is a former theater artiste, who was an active member of troupes such as "Jubilee" and "Harishree". She has a brother, Rahul. She studied Communicative English at the St. Teresa's College, Ernakulam, Kerala, India.Before her entry into the film industry, she was hosting a phone-in music show Hello, Good Evening on the Malayalam channel Kairali TV. Having learned carnatic music from her childhood, she has sung several numbers for devotional albums and also ventured into playback singing, having lent her voice for a song from the Malayalam biopic on P. Kunhiraman Nair, Ivan Megharoopan, composed by Sharreth.She made her career debut in 2000 with Sayahnam. Following performances as a child artiste in several Malayalam films during the early 2000s, she went on to play minor supporting roles, before essaying starring roles since 2006. In 2008, she appeared in her first non-Malayalam project, while receiving critical acclaim for her performances in the films Traffic (2011) and Chaappa Kurish (2011). Besides acting, Remya has occasionally worked as a television presenter and singer as well. Remya first appeared as a child artiste in the critically acclaimed drama film Sayahnam in 2000, directed by R. Sarath. She further essayed minor supporting roles in the following years in films including Sathyan Anthikad's satire film Narendran Makan Jayakanthan Vaka (2001), the art film Sthithi (2002), under R. Sarath's direction again, and Gramaphone (2003) and Perumazhakkalam (2004), both directed by Kamal. She collaborated a third time with Sarath for the short film Bhoomikkoru Charamageetham (2006), a cinematic version of a poem by O. N. V. Kurup. In 2008, she accepted her first non-Malayalam project, Andamaina Mansulo in Telugu, which was followed by her first Tamil film, the romantic drama Raman Thediya Seethai. - IMDb Mini Biography By: Anish Balan

Amazon Video has the most number of Ramya Nambeeshan’s flixes, followed by YouTube compared to other streaming platforms. See the full graph below.

On average the IMDB score of the movies that Ramya Nambeeshan has worked on is 6.0.

A pizza delivery boy lands in a mysterious circumstance and it works a dramatic change in his life.

A real life account of the deadly Nipah virus outbreak in Kerala, and the courageous fight put on by several individuals which helped to contain the epidemic.

Comedy,Drama,Family
Philips and the Monkey Pen (2013)

Ryan Philips is a school boy who is always up to mischief when it comes to studying the maths subject. His life is turned around when he discovers a magical pen at his antique collecting grandfather's house.

While conducting an investigation into the mysterious death of a fellow officer, a cop's own reputation is questioned when a suspect in his custody is shot.

Five friends maimed from mercury poisoning try to cover up for an accident that left a man dead.

A creative executive at an advertising agency and his girlfriend try to solve the mystery of their friend Icha who seemingly starts to appear at two different places at the same time.

The lives of four characters from diverse backgrounds whose passage to the U.K. and its aftermath are dealt with in the film. Jayasurya plays Shankaran, a Kathakali artiste-turned-waiter ...

The relationship of three ambitious friends goes through a rough patch when two of them fall for the same girl.