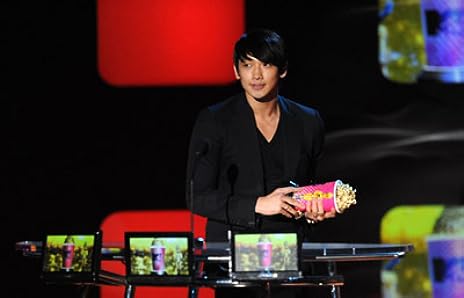 Rain was born in Seoul, South Korea, on June 25, 1982 with the birth name Jung Jihoon. He was extremely shy in elementary school, stating in interviews that he barely spoke a word. He caught the desire to become a dancer when, at a school talent show in sixth grade, no one from his school stepped forward to dance so he gave it a try, imitating the moves he saw on TV. The applause was extremely gratifying and he decided on the spot to become a professional dancer. In order to learn, he sought out older street dancers, who sometimes helped him, sometimes bullied and beat him up. Rain and his younger sister, Hana, enjoyed a comfortable life until the Korean recession of 1997, when his father's mill and bakery businesses failed. Bankrupt, his father left for Brazil to pursue economic opportunities, leaving Rain's mother to try to support the family as a food vendor. Rain's mother was ailing from diabetes due to lack of money for medical care and insulin. Rain got a start in the entertainment business briefly as part of a six-member boy-band called Fanclub. Revealing abuses in the Korean entertainment industry, Rain described the Fanclub members as "caged animals" locked in the rehearsal room for up to ten hours without food. After Fanclub released only two CDs, the company promoting the band failed and Rain was back to square one. During his junior year of high school Rain lived with some of his dance group members, subsisting mostly on cups of ramen noodles. He auditioned eighteen times for entertainment companies but was told that, although he was talented, he was too ugly to become a star. He was told that he should have plastic surgery to create "double eyelids", a common Korean practice to obtain more western-looking eyes. Finally in 2000, he was accepted by JYP Entertainment as a trainee. CEO Park Jin Young, who put Rain through a grueling 3-4 hour audition, described Rain as "desperate" and "like a tiger who was about to starve to death" (2008 Discovery Channel documentary "Hip Korea"). JYP stipulated that Rain had to attend college so, after studying "ferociously," Rain got accepted to Kyunghee University and became a music major. Rain spent three years as a trainee and back-up dancer for JYP, who has stated that he was particularly critical of Rain in order to push him to be the best and keep him from "getting a swelled head." During Rain's time as a trainee, his family was living in poverty and his mother was becoming increasingly ill due to lack of money for medicine. Rain drove himself hard in order to prove himself ready to make his debut, but did not achieve success in time to save her life. She died from complications of diabetes a year before his debut. This event had a huge impact on Rain. He has said in interviews that he regrets having had conflict with her over skipping school to go to dance practice, and that he believes she is in heaven where she can see him. He says that a major motivation in his life is to make her proud and he still visits her grave before embarking on each new project. Another motivator Rain has mentioned is remembering what it was like to be hungry. He is a self-professed workaholic and after acting alongside him in Speed Racer, John Goodman called him "the hardest working man in show business." - IMDb Mini Biography By: isilvalie

Rakuten Viki has the most number of Rain’s flixes, followed by Kocowa compared to other streaming platforms. See the full graph below.

Rain works mostly in Drama Genre followed by Romance Genre flixes. 29% of Rain movies are Drama Genre movies. See Top Genres that Rain worked on in the graph below.

On average the IMDB score of the movies that Rain has worked on is 7.1.

In a bid to reacquire her childhood home, a free-spirited woman agrees to a sham-marriage with a selfish actor. Their daily lives are complicated by overlapping love triangles and comic misadventures.

An action drama about people who struggle to change their fate, one of whom is an elite detective with great analyzing skills.

Idol Rebooting Project: The Unit is a South Korean survival reality show on KBS2. The concept of the show is to form male and female unit groups of nine members each, among idols who had ...

"Welcome 2 Life" is a fantasy drama that will tell the story about a selfish lawyer who helps people who want to take advantage of the law. One day he gets sucked into a parallel universe ...

A young boxer becomes a bodyguard to the actress responsible for his brother's attempted suicide. She falls in love with him, unaware of his true identity or his plans for revenge.

After being worked to death, Kim Young Soo (Kim In Kwon) gets the chance to live a charmed life when he possesses Lee Hae Joon (Rain), a hottie and all around perfect guy. Meanwhile, Hong ...

Hyun Wook (Bi) is the CEO of a talent agency that scouts and trains idols. He is a brilliant composer-producer who appears cold and indifferent on the outside but is sensitive and ...

A young woman suffers difficulty in her work and love life due to her unattractive appearance, until she meets the right guy.