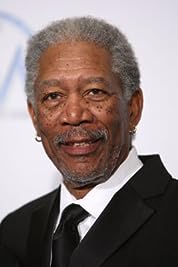 Amazon Video has the most number of Morgan Freeman’s flixes, followed by Google Play Movies compared to other streaming platforms. See the full graph below.

On average the IMDB score of the movies that Morgan Freeman has worked on is 6.6.

Two imprisoned men bond over a number of years, finding solace and eventual redemption through acts of common decency.

A comprehensive survey of the American Civil War.

Documentary
Through the Wormhole (2010)

Hosted by Morgan Freeman, Through the Wormhole will explore the deepest mysteries of existence - the questions that have puzzled mankind for eternity. What are we made of? What was there ...

Two detectives, a rookie and a veteran, hunt a serial killer who uses the seven deadly sins as his motives.

Documentary
e2: The Economies of Being Environmentally Conscious (2006)

A six-part series about international efforts to design and build eco-friendly structures through sustainable architecture.

A determined woman works with a hardened boxing trainer to become a professional.