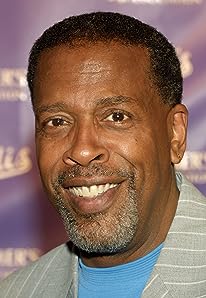 Surrounded by four dazzling Southern-styled ladies on the hit sitcom Designing Women (1986), genial African-American actor Meshach Taylor made a name for himself as the beleaguered male foil consistently at the mercy of the title gals' antics during its popular 7-season run.The Boston-born actor who entered life on April 11, 1947, was raised in New Orleans and Indianapolis (Crispus Attucks High School) and took an early interest in acting back in high school. He first studied drama at Ohio's Wilmington College before transferring to Florida A&M in Tallahassee, Florida.Gaining experience back at an Indianapolis radio station as a State House political correspondent and in repertory theater. His first professional break came in with a national tour of the musical "Hair." He eventually became a member of both Chicago's Goodman Theatre and the Organic Theatre group. One of his stage performances, "Sizwe Banzi Is Dead," earned him Chicago theater's Joseph Jefferson Award. Taylor transported himself to Los Angeles in the 78 and found minor work in a few of the popular horror films of the day: Damien - Omen II (1978), Varulvarna (1981) and Odjuret inom dig (1982), and also started to make the typical rounds on popular TV shows including "Barney Miller," "Lou Grant" and "M*A*S*H."After a regular part on the promising, but short-lived Buffalo Bill (1983), he nabbed the Emmy-nominated role of Anthony Bouvier, the jailbird-turned-assistant to Delta Burke, Annie Potts, Jean Smart and Dixie Carter. Originally a guest part at the beginning, he proved popular with audiences and the show progressed his character and was eventually made a full partner of the ladies' designer firm.Following this success, Taylor moved straight into four seasons with the sitcom Dave's World (1993) as a poker-playing buddy/neighbor to Harry Anderson. His film and TV load has been fairly lightweight overall with routine turns in such comedy fare as Skyltdockan (1987) and Class Act (1992), an Olsen twins mini-movie, and as a regular panelist on a revamped version of To Tell the Truth (2000). One of his brighter moments (literally) was playing the role of Lumiere in Broadway's "Beauty and the Beast."His later career was comprised of lowbudget comedy films such as Jacks or Better (2000), Friends and Family (2001), Club Fiji (2008), as well as horror/drama including Tranced (2010), Wigger (2010) and Hyenas (2011). He was occasionally seen as a guest on the small screen in such shows as "The Drew Carey Show," "Hannah Montana," "Jessie" and, his last, "Criminal Minds," as well as a regular role in the series Ned's Declassified School Survival Guide (2004), which lasted three seasons.After his 11-year marriage to Sandra Taylor ended in 1980, Meshach married actress Bianca Taylor ("General Hospital") in 1983 and had three children. He had one child from his first marriage. In addition to daughters Tamar, Yasmine and Esme and son Tariq, he has a sister, Judith, and brother, Hussain, a private investigator in the Los Angeles area, as well as four grandchildren. His father, Joseph, was a Dean at Indiana University and his mother, Hertha, a school teacher in Indianapolis, Indiana. Taylor died at age 67 of colorectal cancer on June 28 2014, in the Los Angeles area (Altadena). Terminally ill and extremely weak, he nevertheless flew with his children to Indiana just one week before his death to celebrate the centennial birthday of his mother. He was interred at Forest Lawn in Glendale, CA. - IMDb Mini Biography By: Gary Brumburgh / gr-home@pacbell.net

YouTube has the most number of Meshach Taylor’s flixes, followed by Vudu compared to other streaming platforms. See the full graph below.

On average the IMDB score of the movies that Meshach Taylor has worked on is 5.4.

The misadventures of four women and their handyman running a design firm in Atlanta, Georgia.

A valedictorian and a juvenile delinquent have their school records switched and begin to be treated like the other.

Comedy,Fantasy,Romance
Mannequin: On the Move (1991)

A young department store intern falls in love with a female store mannequin who is really a peasant girl fallen under a thousand year spell. She comes to life whenever he removes the cursed necklace from her.

Roving clans of shape-shifting human/hyena creatures prowl and hunt for human prey. They are hunted by one man seeking revenge for the death of his loved ones.