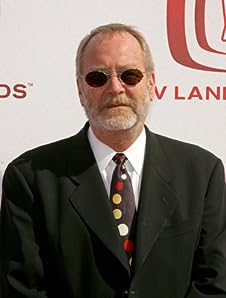 Offbeat funnyman Martin Mull was born in Chicago, Illinois, the oldest of three children of Betty, an actress and director, and Harold Mull, a carpenter. He was raised in Ohio. The blond-maned, blue-eyed comedian with the sad, droopy mustache first came in contact with the arts by honing in on his innate talents as a painter. In order to pay his art school tuition, he started organizing bands. At around the same time, he discovered that stand-up comedy was another way to allow his creative juices to flow. Martin's early recognition as a humorist led to a recording contract, and, over the years, he would be Grammy-nominated several times for a number of eccentric comedy albums. His gimmick and allure came in the form of a dry, humorless delivery and a bland, highly conservative-looking demeanor, which masked a sly, witty and ultra-hip philosophy. Gaining popularity in the 1970s, he finally broke into TV with the cult soap opera parody Mary Hartman, Mary Hartman (1976) in which he played Garth Gimble, a volatile wife abuser whose comeuppance occurred in the form of an aluminum Christmas tree (impaled) in his home closet. Martin was so popular on the show that he was resurrected in the spin-off series Fernwood 2 Night (1977) as twin brother Barth Gimble, who was a co-host of the town's television program along with Fred Willard's Jerry Hubbard character. After this peak, Martin became a sought-after guest on the talk show circuit, not to mention variety specials and TV movies. He tried his hand at producing and starring in his own sitcom Domestic Life (1984) but the series failed. He also added his special brand of merriment to films over the years, some of them being decent, such as FM (1978), Serial (1980), Se upp, farsan är lös! (1983) and Mordet är fritt (1985) in the role of the tweedy-looking Colonel Mustard, while most have been either formula schtick or just plain drivel, as in Nu skiter jag i det här jobbet (1981), Rented Lips (1988), which he produced and wrote, Cutting Class (1989), Far Out Man (1990) with Cheech & Chong, and Mr. Write (1994). Martin's first passion has always been art and the distinguished multi-media artist's work has been showcased in galleries throughout the world. He also authored the book "Painting, Drawing and World," which is a compilation of ten years of his work. Mull is married to a composer and musician, Wendy, and they have a daughter. - IMDb Mini Biography By: Gary Brumburgh / gr-home@pacbell.net

Amazon Video has the most number of Martin Mull’s flixes, followed by Google Play Movies compared to other streaming platforms. See the full graph below.

On average the IMDB score of the movies that Martin Mull has worked on is 6.4.

In this wicked animated comedy, Mel Wax (Michael McKean) is the head of a dysfunctional Hollywood indie movie studio, Hopeless Pictures, so named after his deceased parents, Hope and Les. ...

Set in a Washington, D.C. bar, Fred Willard was the bartender, and the patrons were all Krofft puppets, including former U.S. Presidents Reagan, Carter, Ford, and Nixon, and news reporters Dan Rather and Ted Koppel.

Three friends at a retirement center have their comfortable existence rattled by a newcomer to the community.

When a sixteen-year-old high school student finds out she's a witch, her two aunts offer guidance on how to control her newly-discovered magical powers.

A pair of newlyweds move in next door to a veteran married couple of 25 years.

It's the end of the 1970s. Hippies are assimilating, women are raising their consciousness, and men are becoming confused and ineffectual. Don't expect to be able to keep track of all the ...