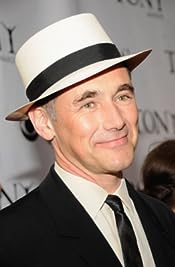 Widely regarded as the greatest stage actor of his generation, Sir Mark Rylance has enjoyed an esteemed career on stage and on screen, and won the Academy Award for Best Supporting Actor and the BAFTA Award for Best Supporting Actor for his portrayal of Rudolf Abel in Steven Spielberg's Spionernas bro (2015). He is also the winner of 2 Olivier Awards and 3 Tony Awards, as well as a BAFTA for his role in The Government Inspector. His film appearances also include Prospero's Books (1991), Angels and Insects (1995), Institute Benjamenta (1996), Intimacy (2001), and Spielberg's SVJ - Stora vänliga jätten (2016).Rylance was born in Ashford, Kent, the son of Anne (née Skinner) and David Waters, both English teachers. His grandmother was Irish. His parents moved to Connecticut in 1962 and Wisconsin in 1969, where his father taught English at the University School of Milwaukee. Rylance attended this school. He starred in most of the school's plays with the theatre's director, Dale Gutzman, including the lead in a 1976 production of Hamlet. He played Romeo in the school's production of Romeo and Juliet.Mark was the first artistic director of Shakespeare's Globe in London, from 1995 to 2005. Rylance made his professional debut at the Citizens Theatre, Glasgow in 1980. He went on to win the Olivier Award for Best Actor for Much Ado About Nothing in 1994 and Jerusalem in 2010, and the Tony Award for Best Actor in a Play for Boeing Boeing in 2008 and Jerusalem in 2011. He won a third Tony Award in 2014 for Twelfth Night. On television, he won the BAFTA TV Award for Best Actor for his role as David Kelly in the 2005 Channel 4 drama The Government Inspector and was nominated for an Emmy, Golden Globe, Screen Actors Guild Award and BAFTA TV Award for playing Thomas Cromwell in the 2015 BBC Two miniseries Wolf Hall.In 2007, Rylance performed in Boeing-Boeing in London. In 2008, he reprise the role on Broadway and won Drama Desk and Tony Awards for his performance. In 2009, Rylance won the Critics' Circle Theatre Award Best Actor, 2009 for his role of Johnny Byron in Jerusalem written by Jez Butterworth at the Royal Court Theatre in London. In 2010, Rylance starred in a revival of David Hirson's verse play La Bête. The play ran first at London's Comedy Theatre before transferring to the Music Box Theatre on Broadway, on 23 September 2010. Also in 2010, he won another Olivier award for best actor in the role of Johnny Byron in Jerusalem at the Apollo Theatre in London. In 2011, he won his second Tony Award for playing the same role in the Broadway production. He played Thomas Cromwell in Wolf Hall (2015), BBC Two's adaptation of Hilary Mantel's historical novels Wolf Hall and Bring Up the Bodies. For his performance, he was nominated for the Primetime Emmy Award for Outstanding Lead Actor in a Miniseries or a Movie. Rylance was featured as the castaway on the BBC radio program Desert Island Discs on 15 February 2015.Rylance co-starred in the biographical drama Bridge of Spies, released in October 2015, directed by Spielberg, and starring Tom Hanks, Amy Ryan and Alan Alda. The film is about the 1960 U-2 Incident and the arrest and conviction of Soviet spy, Rudolf Abel and the exchange of Abel for U-2 pilot Gary Powers. Rylance plays Abel and has received unanimous universal acclaim for his performance with many critics claiming it as the best performance of 2015. The St. Louis Post-Depatch quoted, "As the deeply principled Donovan, Hanks deftly balances earnestness and humor. And Rylance's spirited performance is almost certain to yield an Oscar nomination." David Edelstein from New York cited 'It's Rylance who keeps Bridge of Spies standing. He gives a teeny, witty, fabulously non-emotive performance, every line musical and slightly ironic - the irony being his forthright refusal to deceive in a world founded on lies." Rylance won the Academy Award, BAFTA Award, and New York Film Critics Circle Award in the Best Supporting Actor categories, as well as receiving Golden Globe Award and Screen Actors Guild Award nominations, among other wins and nominations. - IMDb Mini Biography By: Polythene Paul and Pedro Borges

Amazon Video has the most number of Mark Rylance’s flixes, followed by undefined compared to other streaming platforms. See the full graph below.

On average the IMDB score of the movies that Mark Rylance has worked on is 7.1.

After the downfall of Cardinal Wolsey, his secretary, Thomas Cromwell, finds himself amongst the treachery and intrigue of King Henry VIII's court and soon becomes a close advisor to the King, a role fraught with danger.

Allied soldiers from Belgium, the British Empire, and France are surrounded by the German Army and evacuated during a fierce battle in World War II.

During the Cold War, an American lawyer is recruited to defend an arrested Soviet spy in court, and then help the CIA facilitate an exchange of the spy for the Soviet captured American U2 spy plane pilot, Francis Gary Powers.

Two young London actors set out together to face the greatest challenge in the world of acting - Shakespeare.

Comedy,Drama,Sport
The Phantom of the Open (2021)

The story of the biggest demonstration in human history, which took place on 15th February 2003, against the impending war on Iraq.

Drama
Institute Benjamenta, or This Dream That One Calls Human Life (1995)

A young man goes to a school for servants run by a brother and sister. In the dreamlike and surreal world that he enters, how will his presence impact the people there and possibly even the school itself?