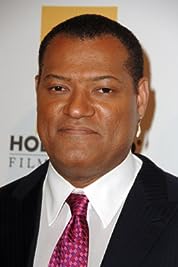 One of Hollywood's most talented and versatile performers and the recipient of a truckload of NAACP Image awards, Laurence John Fishburne III was born in Augusta, Georgia on July 30, 1961, to Hattie Bell (Crawford), a teacher, and Laurence John Fishburne, Jr., a juvenile corrections officer.His mother transplanted her family to Brooklyn after his parents divorced. At the age of 10, he appeared in his first play, "In My Many Names and Days," at a cramped little theater space in Manhattan. He continued on but managed to avoid the trappings of a child star per se, considering himself more a working child actor at the time. Billing himself as Larry Fishburne during this early phase, he never studied or was trained in the technique of acting. In 1973, at the age of 12, Laurence won a recurring role on the daytime soap One Life to Live (1968) that lasted three seasons and subsequently made his film debut in the ghetto-themed Cornbread, Earl and Me (1975). At 14 Francis Ford Coppola cast him in Apocalypse Now (1979), which filmed for two years in the Philippines. Laurence didn't work for another year and a half after that long episode. A graduate of Lincoln Square Academy, Coppola was impressed enough with Laurence to hire him again down the line with featured roles in Rumble Fish (1983), The Cotton Club (1984), and Gardens of Stone (1987).Throughout the 1980s, he continued to build up his film and TV credit list with featured roles despite little fanfare. A recurring role as Cowboy Curtis on the kiddie show Pee-wee's Playhouse (1986) helped him through whatever lean patches there were at the time. With the new decade (1990s) came out-and-out stardom for Laurence. A choice lead in John Singleton's urban tale Boyz n the Hood (1991) catapulted him immediately into the front of the film ranks. Set in LA's turbulent South Central area, his potent role as a morally minded divorced father who strives to rise above the ignorance and violence of his surroundings, Laurence showed true command and the ability to hold up any film. On stage, he would become invariably linked to playwright August Wilson and his 20th Century epic African-American experience after starring for two years as the eruptive ex-con in "Two Training Running." For this powerful, mesmerizing performance, Laurence won nearly every prestigious theater award in the books (Tony, Outer Critics Circle, Drama Desk and Theatre World). It was around the time of this career hallmark that he began billing himself as "Laurence" instead of "Larry." More awards and accolades came his way. In addition to an Emmy for the pilot episode of the series "Tribeca," he was nominated for his fine work in the quality mini-movies The Tuskegee Airmen (1995) and Miss Evers' Boys (1997).On the larger screen, both Laurence and Angela Bassett were given Oscar nominations for their raw, seething portrayals of rock stars Ike and Tina Turner in the film What's Love Got to Do with It (1993). To his credit, he managed to take an extremely repellent character and make it a sobering and captivating experience. A pulp box-office favorite as well, he originated the role of Morpheus, Keanu Reeves' mentor, in the exceedingly popular futuristic sci-fi The Matrix (1999), best known for its ground-breaking special effects. He wisely returned for its back-to-back sequels. Into the millennium, Laurence extended his talents by making his screenwriting and directorial debut in Once in the Life (2000), in which he also starred. The film is based on his own critically acclaimed play "Riff Raff," which he staged five years earlier. In 1999, he scored a major theater triumph with a multi-racial version of "The Lion in Winter" as Henry II opposite Stockard Channing's Eleanor of Acquitaine. On film, Fishburne has appeared in a variety of interesting roles in not-always-successful films. Never less than compelling, a few of his more notable parts include an urban speed chess player in Searching for Bobby Fischer (1993); a military prisoner in Cadence (1990); a college professor in Singleton's Higher Learning (1995); a CIA operative in Bad Company (1995); the title role in Othello (1995) (he was the first black actor to play the part on film); a spaceship rescue team leader in the sci-fi horror Event Horizon (1997); a Depression-era gangster in Hoodlum (1997); a dogged police sergeant in Clint Eastwood's Mystic River (2003); a spelling bee coach in Akeelah and the Bee (2006); and prominent roles in the mainstream films Predators (2010) and Contagion (2011). He returned occasionally to the theatre. In April 2008, he played Thurgood Marshall in the one-man show "Thurgood" and won a Drama Desk Award. It was later transferred to the screen.In the fall of 2008, Fishburne replaced William Petersen as the male lead investigator on the popular CBS drama CSI: Crime Scene Investigation (2000), but left the show in 2011 to refocus on films and was in turn replaced by Ted Danson. Since then Fishburne has appeared in the Superman film Man of Steel (2013) as Daily Planet chief Perry White.Fishburne has two children, Langston and Montana, from his first marriage to actress Hajna O. Moss. In September 2002, Fishburne married Cuban-American actress Gina Torres. - IMDb Mini Biography By: Gary Brumburgh / gr-home@pacbell.net

Amazon Video has the most number of Laurence Fishburne’s flixes, followed by Vudu compared to other streaming platforms. See the full graph below.

On average the IMDB score of the movies that Laurence Fishburne has worked on is 6.9.

Explores the early relationship between the renowned psychiatrist and his patient, a young FBI criminal profiler, who is haunted by his ability to empathize with serial killers.

Pee-Wee Herman and his friends have wacky, imaginative fun in his unique playhouse.

Documentary
They've Gotta Have Us (2018)

The rise of black actors as they have gone from being the backdrop to calling the shots. This is the inside story of the turning points of black life on both sides of the lens, from Sidney Poitier and Harry Belafonte, to the present day.

An adaptation of Alex Haley's "Roots", chronicling the history of an African man sold to slavery in America, and his descendants.

Prior to his appointment to United States Supreme Court Thurgood Marshall worked as a lawyer for the NAACP. This one man play tells the story of his role in the civil rights movement and the people that influenced him.