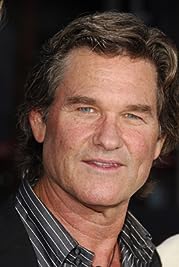 Kurt Russell was born Kurt Vogel Russell in Springfield, Massachusetts, to Louise Julia (Crone), a dancer, and actor Bing Russell (Neil Oliver Russell). He is of English, German, Scottish and Irish descent. His first roles were as a child on television series, including a lead role on the Western series The Travels of Jaimie McPheeters (1963). Russell landed a role in the Elvis Presley movie, It Happened at the World's Fair (1963), when he was eleven years old. Walt Disney himself signed Russell to a 10-year contract, and, according to Robert Osborne, he became the studio's top star of the 1970s. Having voiced adult Copper in the animated Disney film The Fox and the Hound (1981), Russell is one of the few famous child stars in Hollywood who has been able to continue his acting career past his teen years.Kurt spent the early 1970s playing minor league baseball. In 1979, he gave a classic performance as Elvis Presley in John Carpenter's ABC TV movie Elvis (1979), and married the actress who portrayed Priscilla Presley in the film, Season Hubley. He was nominated for an Emmy Award for the role. He followed with roles in a string of well-received films, including Used Cars (1980) and Silkwood (1983), for which he was nominated for the Golden Globe Award for Best Supporting Actor - Motion Picture. During the 1980s, he starred in several films by director Carpenter; they created some of his best-known roles, including the infamous anti-hero Snake Plissken in the futuristic action film Escape from New York (1981) (and later in its sequel Escape from L.A. (1996)), Antarctic helicopter pilot R.J. MacReady in the horror film The Thing (1982), and Jack Burton in the fantasy film Big Trouble in Little China (1986), all of which have since become cult classics.In 1983, he became reacquainted with Goldie Hawn (who appeared with him in The One and Only, Genuine, Original Family Band (1968)) when they worked together on Swing Shift (1984). The two have lived together ever since. They made another film together, Garry Marshall's comedy Overboard (1987). His other 1980s titles include The Best of Times (1986), Tequila Sunrise (1988), Winter People (1989) and Tango & Cash (1989).In 1991, he headlined the firefighter drama Backdraft (1991), he starred as Wyatt Earp in the Western film Tombstone (1993), and had a starring role as Colonel Jack O'Neil in the science fiction film Stargate (1994). In the mid-2000s, his portrayal of U.S. Olympic hockey coach Herb Brooks in Miracle (2004) won the praise of critics. In 2006, he appeared in the disaster-thriller Poseidon (2006), and in 2007, in Quentin Tarantino's Death Proof (2007) segment from the film Grindhouse (2007). Russell appeared in The Battered Bastards of Baseball (2014), a documentary about his father and the Portland Mavericks, which debuted at the Sundance Film Festival in 2014. Russell starred in the Western films Bone Tomahawk (2015) and The Hateful Eight (2015), and had a leading role in the dramatization Deepwater Horizon (2016). He also co-starred in the action sequels Fast & Furious 7 (2015) and The Fate of the Furious (2017).Russell and Goldie Hawn live on a 72-acre retreat, Home Run Ranch, outside of Aspen. He has two sons, Boston Russell (from his marriage to Hubley) and Wyatt Russell (with Hawn). He also raised Hawn's children, actors Oliver Hudson and Kate Hudson, who consider him their father. Russell is also an avid gun enthusiast, a hunter and a staunch supporter of the Second Amendment of the United States Constitution. He is also an FAA-licensed private pilot holding single/multi-engine and instrument ratings, and is an Honorary Board Member of the humanitarian aviation organization Wings of Hope. - IMDb Mini Biography By: Anne-Marie Cowsill

Amazon Video has the most number of Kurt Russell’s flixes, followed by Google Play Movies compared to other streaming platforms. See the full graph below.

On average the IMDB score of the movies that Kurt Russell has worked on is 6.7.

A research team in Antarctica is hunted by a shape-shifting alien that assumes the appearance of its victims.

Documentary,Sport
The Battered Bastards of Baseball (2014)

In 1973, Hollywood actor Bing Russell starts an independent minor league baseball team in Portland consisting of outcasts and misfits, and turns them into unlikely overnight success.

In the dead of a Wyoming winter, a bounty hunter and his prisoner find shelter in a cabin currently inhabited by a collection of nefarious characters.

Documentary
The Age of Believing: The Disney Live Action Classics (2008)

Along with his legendary cartoons, Walt Disney produced a marvelous array of live action classics that came about through the use of his singular style, hard work and an unwavering belief in this vision.

A successful lawman's plans to retire anonymously in Tombstone, Arizona are disrupted by the kind of outlaws he was famous for eliminating.

Adventure,Comedy,Drama
Interstate 60: Episodes of the Road (2002)

Neal Oliver, a very confused young man and an artist, takes a journey of a lifetime on a highway I60 that doesn't exist on any of the maps, going to the places he never even heard of, searching for an answer and his dreamgirl.

A documentary about writer and director Brian De Palma.

The true story of Herb Brooks, the player-turned-coach who led the 1980 U.S. Olympic hockey team to victory over the seemingly invincible Soviet squad.