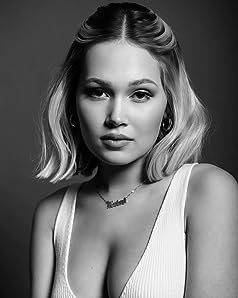 Kelli Berglund has quickly become "one to watch" in the entertainment industry, captivating audiences with the characters she has brought to life on both the big and small screens.In Spring 2019, Berglund made waves starring as a young Gwen Verdon in the Emmy-winning limited biopic series "Fosse/Verdon" for FX, alongside Sam Rockwell and Michelle Williams. Executive produced by Lin-Manuel Miranda, the series provides an intimate look at the romantic and creative partnership between the famous choreographer/director Bob Fosse (Rockwell) and Gwen Verdon (Williams), one of the greatest dancers of all time. Berglund shines as a very talented young Gwen, earning public praise from Miranda himself for her "incredible" performance.Additionally, Berglund most recently starred alongside Beau Mirchoff and Avan Jogia in STARZ' edgy, coming-of-age comedy, "Now Apocalypse," which made rounds at the 2019 festival circuits, including the Sundance Film Festival, SXSW and the CanneSeries Television Festival in France. Created and executive produced by Gregg Araki and Steven Soderberg, the 10-episode comedy follows a group of four friends on various pursuits for love, sex, and fame while navigating the strange and perplexing city of Los Angeles. Berglund shines as the leading lady Carly, a wannabe actress and Ulysses' (Jogia) raunchy, tell-it-like-it-is best friend.Additional credits for Berglund include a recurring role in TNT's longstanding, hit drama series "Animal Kingdom," a starring role as Willadeene Parton in NBC's Emmy-nominated "Dolly Parton's Christmas of Many Colors: Circle of Love." She can also be seen in a lead role opposite Jake Busey in the indie horror feature "Ghost in the Graveyard" (Cellar Door Films), set to debut November 2019. Berglund is also well-known for her lead role as Bree Davenport from 2012-16 on Disney XD's hit series "Lab Rats" and "Lab Rats: Elite Force." While on "Lab Rats," Berglund also starred in the Disney Channel Original Movie "How to Build a Better Boy," opposite China Anne McLain and Noah Centineo, which became a smash hit for the channel.On the theatre front, in 2017 Berglund brought her dancing, singing, and acting skills to the stage starring as Belle in Pasadena Playhouse's featured winter production "Beauty and the Beast: A Christmas Rose." Produced by Lythgoe Family Panto, the play offered an updated version of the classic tale, featuring family-friendly magic with a comedic twist, dancing, contemporary music, and more.A California native, Berglund has also worked closely with the Audrey Hepburn CARES Center, in association with the Children's Hospital Los Angeles, which provides services for suspected victims of child abuse and their families. She is also an accomplished dancer and has been honored with a number of awards for her talents in lyrical, contemporary, ballet, pointe, hip-hop, tap, and jazz. On the social media front, Berglund's talent, beauty, and style have captivated a following of over 3.2 million fans and growing across Instagram, Facebook, and Twitter. - IMDb Mini Biography By: Jordyn Palos, Persona PR

Amazon Video has the most number of Kelli Berglund’s flixes, followed by Vudu compared to other streaming platforms. See the full graph below.

On average the IMDB score of the movies that Kelli Berglund has worked on is 6.5.

Drama,Family
Dolly Parton's Christmas of Many Colors: Circle of Love (2016)

An unexpected blizzard threatens the Parton family, while at the same time Dolly's father (and his kids) make sacrifices to raise enough money to finally buy his wife the wedding ring he ...

A scrawny 14-year-old, having discovered his inventor stepdad has three bionic, super-powered teens living cloistered in a secret lab beneath their home, brings them out into the world.

While on quests to pursue love, sex, and fame with his friends in Los Angeles, Ulysses' premonitory dreams make him question the possible presence of a dark and monstrous conspiracy.

When Mighty Med hospital is destroyed, bionic heroes Bree and Chase join superheroes Kaz, Oliver, and Skylar to form an Elite Force and take down those responsible for the attack.

Romantic anthology web series revolving around 12 stories of 12 months of young people on their paths to love.

A teenager who gave up her spot in an elite U.S. gymnastics program when her family moved to Australia enters a competition to help a new friend.

Seventeen year old, Emma joins a high school cheerleading team when she moves to Australia with her dad who is a former Air Force Officer.