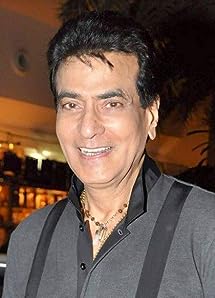 Ravi Kapoor was born in a business family that dealt with imitation Jewelery and used to live in a chawl. While supplying jewelry to V. Shantaram, he was cast as Sandhya's double in the 1959 movie 'Navrang'.His first break as a Bollywood leading man came in 'Geet Gaya Patharon Ne'. Although Ravi Kapoor was born on April 7, 1942, Jeetendra birth's took place in 1964.When he was to go for auditions, he used to seek help from his childhood friend Rajesh Khanna to mug up his dialog and get guidance to give expressions.Geet Gaaya Pattharonne was his first hit, but that didn't fetch him offers as lead hero. It was Farz released in 1967, which was his 4th film appearance and 3 rd as the male lead, which made him a known face in the public.Ravi had met his present wife, Shobha, when she was only 14. She completed school, went to college, and was employed as an Air Hostess with British Airways.Shobha gave birth to a daughter, Ekta, and subsequently to a son, Tusshar. While Ekta became a producer of TV serials, mostly starting with 'K', Tusshar followed in his dad's footsteps. Ekta and Jeetu run a production company by the name of Balaji Films, and have produced Bollywood movies. Their TV productions are usually in Hindi & Tamil languages.Jeetendra has acted opposite Rajshree Shantaram, Mumtaz, Saira Banu, Mala Sinha, Nanda, Sharmila Tagore,Asha Parekh, Babita, Hema Malini, Moushumi Chatterjee, Reena Roy, Jaya Pradha, Sridevi, Komal, Rekha, Parveen Babi, Neetu Singh, Shabana Azmi, Padmni Kolhapuri,Bhanupriya, Madhavi, Anita Raaj, Sangeeta Bijlani, Ashwini Bhave.Whether running around trees (Tumhari Kasam, Ek Hi Bhool, Mawaali),singing songs (Banphool, Humjoli, Jigri Dost) or playing serious characters (Parichay, Khushboo, Dulhan, Kinara, Meri Awaz Suno,Chhup) or doing old man leading roles (Udhaar Ki Zindagi, Santaan, Jeetendra has always proved himself as an excellent actor, a family man, whose marriage is still intact, and someone who has yet to be involved in any controversy. He did 93 films as the solo lead hero and 103 multi star films as the lead hero and 2 films as a supporting actor and made guest appearances in 26 films.Ravi had met his present wife, Shobha, when she was only 14. She completed school, went to college, and was employed as an Air Hostess with British Airways. When Jeetendra was struggling between 1960-66 to establish himself as an actor, he was in relationship with Shobha and Shobha was his girlfriend till 1972. But in 1974, after having worked in films like Waris and Gehri Chaal, friendship between Jeetendra and Hema Malini grew and while shooting for Dulhan, both expressed love for each-other and decided to have a quick marriage.But soon this information reached Shobha and Dharmendra.Shobha asked Dharmendra to change Hema's mind as she was in love with Jeetendra since many years. Soon both Shobha and Dharemndra came by helicopter and convinced Jeetendra and Hema not to marry. Jeetendra promised Shobha that if Bidai becomes a hit, he would marry her in 1974. It was not until the release of 'Bidaai"(opposite Leena Chandavarkar) on October 18, 1974, that Jeetendra and Shobha decided to get married, which they did in a simple ceremony on at Janki Kutir with only a few family and friends present (Gulzar, Rajesh Khanna and Sanjeev Kumar amongst the noted celebrities). The marriage was arranged hastily, as even Shobha's mom, who was in Japan at that time, could not attend.Jeetendra's friendship with both actors Dharmendra, Hema Malini never got affected after this incident. All 3 remained friends. Jeetendra worked with Dharmendra and had hits like Dharamveer, Jaani Dost, Insaaf Ki Pukar, Nafrat Ki Andhi and flops like The Burning Train, Samraat, The Gold Medal, Jaan Hatheli Pe, Paapi Devtaa, Dharma Karma. Childhood school and college friends Rajesh Khanna and Jeetendra worked together and gave 3 blockbusters in the 1980's- Dharam Kanta(1982), Nishaan(1983) and Maqsad(1984). Infact all 3 films revenue showed increasing trend. Maqsad was the highest box office earner in the year 1984. Jeetendra made guest appearances in Roti, Palkon Ki Chaon Mein and Begunaah - all three films which had Rajesh Khanna as the solo lead hero. Jeetendra-Rekha were romantically paired in 26 films and had 16 hits of the 26 films as lead pair starting from 1972-1998 and only 10 flops. In addition Rekha and Jeetendra worked in another 5 films where they were not paired opposite each-other.Jeetendra-Sridevi did 16 films together between 1983-88 and 13 of them were hits and 3 were flops. Jeetendra and Jaya Prada were romantically paired opposite each other in 24 films and 18 of them were box office hits and 6 were flops. In addition 2 more films they did together where they were not paired opposite each-other. Jeetendra gave 113 box office hits (excluding guest appearances in hits Navrang, Khilona, Roti, Umar Qaid, Rani Aur Lalpari,Naya Bakra, Anokha Bandhan, Begunaah and Om Shanti Om) as the lead hero from 1964-1997, off the 198 films he appeared till 2007 as lead hero.He appeared in guest appearance in 26 other movies from 1959 to 2007 and 2 more films in supporting role after 2000. Jeetendra was 2nd highest paid Hindi actor from 1980-89. He made a guest appearance in a TV serial 'Kahani Ghar Ghar Ki'.Hence his total film appearances were in 226 films and 121 of them were box office hits and 102 were flops. - IMDb Mini Biography By: rAjOo

Amazon Video has the most number of Jeetendra’s flixes, followed by Eros Now compared to other streaming platforms. See the full graph below.

On average the IMDB score of the movies that Jeetendra has worked on is 5.4.

A journalist is illegally jailed for exposing two corrupt politicians, He exacts revenge through his new mysterious newspaper.

Bombay-bred Narain goes to a village, where he meets and falls in love with a village belle, Yashodra. She also is attracted to him, and both get married. After their marriage, both go to ...

A dedicated railway employee's plan to introduce an express train result in sabotage.

Aarti, a dancer, is grieving over the death of her lover, Chandan. She is befriended by Inder who eventually falls in love with her. But a revelation about their connected past leaves them in shock.

Jeetu and Dolly are in love and would like to get married. After seeking Dolly's dad's blessings, they do get married and move in together. They live harmoniously for quite some time, until...

Sagar Singh is a businessman who lives in scenic Simla with his widowed mom; brother, Bipin, his wife, Urmila; sister, Prema; and brother, Kishan. When he returns from USA, he meets with ...

Movie revolves around two brothers who are separated during birth but meet as adults and form a deep friendship. Also about the challenges that test their friendship.

Raisaheb Surajbhan Chaudhary lives a wealthy lifestyle in a palatial mansion with his wife of 30 years, Rajlaxmi, and two sons, Rajkumar, who has been married to Shyama for several years; ...