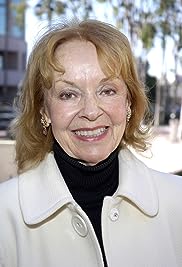 Janet Waldo provided the quintessential voice of the swooning, overly dramatic teenager for numerous generations -- from the 1940s swinging babysitters to the 1960s groovy chick. A bouncy, perennially-youthful brunette, she was born in Grandview, Washington, and began entertaining in church plays as a youth. Urged on by her singer mother, she studied at the University of Washington and performed in plays. She was discovered by none other than Paramount star Bing Crosby, when he and his talent scouts conducted a contest and invited her to try out for it, which she won. Crosby next invited Janet (accompanied by her mother) to California and the rest is history.Janet met a Paramount talent scout that signed her up for small roles in movies, including the Crosby films, Les bébés turbulents (1938) and Frou-frou de Broadway (1939). Unable to completely break out of her bit-part cycle as assorted hat-check girls, receptionists, and telephone operators, she did manage a few co-starring roles in such Tim Holt westerns, such as The Bandit Trail (1941) and Land of the Open Range (1942) before setting her career sights on radio in 1943. It was Crosby himself who introduced her to radio and she fell in love with the medium and its possibilities. As the eternal teen in "Meet Corliss Archer", her voice became a household sound and it was obvious that. her vocal talents would become her biggest moneymaker. She also performed on radio's "One Man's Family", "The Gallant Heart", and "Star Playhouse". She played the cigarette girl on both Red Skelton and Art Linkletter's programs, and teenager Emmy Lou on Ozzie Nelson on both his radio and TV shows. In 1952, she filmed one classic I Love Lucy (1951) episode, I Love Lucy: The Young Fans (1952) playing an extremely lovesick teenaged girl, who fell for Ricky Ricardo, although she was past 30 at the time.In 1948 Janet married writer-director-producer Robert E. Lee of "Inherit the Wind" and "Auntie Mame" fame. She curtailed her career activities sharply for some time in order to raise her two children. She even turned down the opportunity to return to her popular role of Corliss Archer when the radio series was revamped for TV in 1951, and Lugene Sanders from the "Life of Riley" series took on the part instead. After sporadic appearances on stage, Janet established herself as one of the top female voice artists in the early 1960s when she gave vocal life to hip high schooler Judy Jetson in the prime-time Hanna-Barbera cartoon series Les Jetsons (1962), a role that she would go on to play well past the age of 70. Her vocal range led her to become a Hanna-Barbera staple for over three decades, providing hundreds and hundreds of voices, old and young, to both Saturday morning and feature film cartoons. Some of her better known characters include Granny Sweet, Penelope Pitstop, Superman's Lana Lang, the Addams Family's Morticia Addams, the title role in Josie and the Pussycats (1970) and Princess on Sandy Frank's La bataille des planètes (1978).She was a member of the California Artists Radio Theatre (CART) and performed frequently on the smaller L.A. stages over the years. The woman with a thousand voices continued doing radio shows and commercial voice-overs (Electrosol), and making personal appearances. She also wrote a personal biography. - IMDb Mini Biography By: Gary Brumburgh / gr-home@pacbell.net

Amazon Video has the most number of Janet Waldo’s flixes, followed by Boomerang compared to other streaming platforms. See the full graph below.

On average the IMDB score of the movies that Janet Waldo has worked on is 6.9.

A modern continuation of the original Tom and Jerry cartoon, where the cat-and-mouse duo are now close friends through a series of adventures and chaos.

Scooby Doo and the gang solve mysteries; then Blue Falcon and Dynomutt fight crime in each two-part episode of this animated series.

Adventure,Animation,Family
The Adventures of the Little Prince (1978)

Based on the character from the Antoine de Saint-Exupéry novella, when the little prince isn't tending to the baobab trees and volcanoes on his tiny planet, he's catching a passing shooting...

Just when you thought TV was finally "civilized," it's back to the Stone Ages for a brand new series featuring the entire Flintstone gang! Join the fun in the town of Bedrock with this ...

By the same people that brought us "Flintstones, The" (1960), this similar cartoon was about people living in Rome in 63 A.D.

Animation,Comedy,Family
Josie and the Pussy Cats in Outer Space (1972)

The Pussycats and a pet-sized fluffy alien called Bleep, encounter strange new worlds, where they are often kidnapped by various alien races before escaping and attempting to return home.