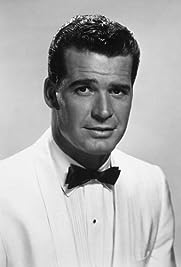 Amiable and handsome James Garner had obtained success in both films and television, often playing variations of the charming anti-hero/con-man persona he first developed in Maverick, the offbeat western TV series that shot him to stardom in the late 1950s.James Garner was born James Scott Bumgarner in Norman, Oklahoma, to Mildred Scott (Meek) and Weldon Warren Bumgarner, a carpet layer. He dropped out of high school at 16 to join the Merchant Marines. He worked in a variety of jobs and received 2 Purple Hearts when he was wounded twice during the Korean War. He had his first chance to act when a friend got him a non-speaking role in the Broadway stage play "The Caine Mutiny Court Martial (1954)". Part of his work was to read lines to the lead actors and he began to learn the craft of acting. This play led to small television roles, television commercials and eventually a contract with Warner Brothers. Director David Butler saw something in Garner and gave him all the attention he needed when he appeared in The Girl He Left Behind (1956). After co-starring in a handful of films during 1956-57, Warner Brothers gave Garner a co-starring role in the the western series Maverick (1957). Originally planned to alternate between Bart Maverick (Jack Kelly) and Bret Maverick (Garner), the show quickly turned into the Bret Maverick Show. As Maverick, Garner was cool, good-natured, likable and always ready to use his wits to get him in or out of trouble. The series was highly successful, and Garner continued in it into 1960 when he left the series in a dispute over money.In the early 1960s Garner returned to films, often playing the same type of character he had played on "Maverick". His successful films included Le piment de la vie (1963), Pousse-toi, chérie (1963), La grande évasion (1963) and Les jeux de l'amour et de la guerre (1964). After that, his career wandered and when he appeared in the automobile racing movie Grand Prix (1966), he got the bug to race professionally. Soon, this ambition turned to supporting a racing team, not unlike what Paul Newman would do in later years.Garner found great success in the western comedy Ne tirez pas sur le shérif (1969). He tried to repeat his success with a sequel, Tueur malgré lui (1971), but it wasn't up to the standards of the first one. After 11 years off the small screen, Garner returned to television in a role not unlike that in Ne tirez pas sur le shérif (1969). The show was Nichols (1971) and he played the sheriff who would try to solve all problems with his wits and without gun play. When the show was canceled, Garner took the news by having Nichols shot dead, never to return in a sequel. In 1974 he got the role for which he will probably be best remembered, as wry private eye Jim Rockford in the classic Deux cent dollars plus les frais (1974). This became his second major television hit, with Noah Beery Jr. and Stuart Margolin, and in 1977 he won an Emmy for his portrayal. However, a combination of injuries and the discovery that Universal Pictures' "creative bookkeeping" would not give him any of the huge profits the show generated soon soured him and the show ended in 1980. In the 1980s Garner appeared in few movies, but the ones he did make were darker than the likable Garner of old. These included Tank (1984) and Murphy's Romance (1985). For the latter, he was nominated for both the Academy Award and a Golden Globe. Returning to the western mode, he co-starred with the young Bruce Willis in Meurtre à Hollywood (1988), a mythical story of Wyatt Earp, Tom Mix and 1920s Hollywood.In the 1990s Garner received rave reviews for his role in the acclaimed television movie about corporate greed, Les requins de la finance (1993). After that he appeared in the theatrical remake of his old television series, Maverick (1994), opposite Mel Gibson. Most of his appearances after that were in numerous TV movies based upon Deux cent dollars plus les frais (1974). His most recent films were Président? Vous avez dit président? (1996) and Space Cowboys (2000) . - IMDb Mini Biography By: Tony Fontana < tony.fontana@spacebbs.com> and pchemoc389@rogers.com

Amazon Video has the most number of James Garner’s flixes, followed by Google Play Movies compared to other streaming platforms. See the full graph below.

On average the IMDB score of the movies that James Garner has worked on is 7.0.

The cases of an easy going ex-convict turned private investigator.

A poor yet passionate young man falls in love with a rich young woman, giving her a sense of freedom, but they are soon separated because of their social differences.

Set in Sweetwater, Arizona in the 1880s with solid citizen Bret owning a ranch and part of the Red Ox Saloon. Stable cast with varying stories, often centered on conflict between the ambitious sheriff and everyone else.

God has made a bet with the Devil: if one human of the Devil's choosing can't prove that humanity is decent, God will scrap all of creation and start over. The Devil chooses Detroit car ...

A documentary on the Baja 1000, an annual off-road race held in Baja, Mexico that attracts hundreds of racers, their souped-up machines, and thousands of fans.

A deceased billionaire leaves his spoiled adult grandson a series of odd tasks to perform in order to receive "the ultimate gift," with the resentful grandson having no idea what that might be.

Captain Woodrow Call, now retired from the Rangers, is a bounty hunter. He is hired by an eastern rail baron to track down Joey Garza, a new kind of killer, only a boy, who kills from a ...