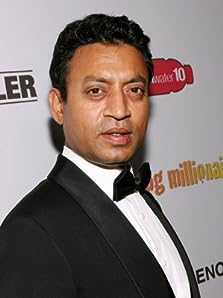 Born Sahabzade Irfan Ali Khan, in Jaipur, Rajasthan (NW India) January 7, 1967 to a Pashto-speaking Muslim family. Khan's mother, Begum Khan, was from the Tonk Hakim family and his father, Jagirdar Khan, from the Khajuriya village near the Tonk district, ran a tire business.The Khan family name comes from Turkish and Mongol languages and mean "king" or great leader. Descendants of Genghis Khan (13th century) in central Asia adopted Islam and became the Moghuls, who conquered India for several centuries until Brittish rule.Irfan was a skilled cricket player. In his early 20's he was selected for the CK Nayudu Tournament (a stepping stone to First Class cricket). He did not turn up for the tournament owing to lack of funds and as a result he focused on acting.In 1984 he earned a scholarship to the National School of Acting in New Delhi.He was awarded the Padma Shri, India's fourth highest civilian honor for his contribution to the field of arts.His portrayal of Paan Singh Tomar in the acclaimed biographical sports drama Paan Singh Tomar (2011) won him the National Film Award for Best Actor and a Filmfare Critics Award for Best Actor. His performance in the BAFTA Award nominated romance The Lunchbox (2013) earned him universal acclaim by the critics and audiences.Globally, Khan was in The Warrior (2001), The Namesake (2006), The Darjeeling Limited (2007), the Academy Award-winning film Slumdog Millionaire (2008), New York, I Love You (2009), The Amazing Spider-Man (2012), Life of Pi (2012), Jurassic World (2015) and Inferno (2016). As of 2017, his films have grossed $3.643 billion at the worldwide box office. In 2018, Khan was diagnosed with a neuroendocrine tumor.Khan got married to his wife Sutapa Sikdar, in 1995. She is a Hindu of the Brahmin caste. She is a movie producer, dialogue writer and screenwriter. Among her famous movies are Khamoshi: The Musical (Dialogue Writer, 1996), Supari (Dialogue Writer, 2003), Kahaani (Dialogue Writer, 2003), Madaari (Producer, 2016), Qarib Qarib Singlle (Producer, 2017)They have two kids: Ayaan Khan, Babil KhanUnlike most Indian film stars, Irrfan has been outspoken on religion. On Arnab Goswami's talk show, he took on Muslim fundamentalists, including India's Grand Imam. Irrfan Khan argued against "transactional religious interaction" and for "personal religious discovery"..."to discover yourself, to find God". Though he admits he is "not an authority" on the Koran and Islamic Holy scriptures he has bravely stood by his comments despite heavy criticism and even threats of violence. He's aware of the dangers that his frank comments pose to him and his family. His wife commented, "We are very proud of him." - IMDb Mini Biography By: Apollo Karuna

Amazon Video has the most number of Irrfan Khan’s flixes, followed by Google Play Movies compared to other streaming platforms. See the full graph below.

On average the IMDB score of the movies that Irrfan Khan has worked on is 6.5.

After years of painstaking research at the cost of his domestic pleasure, Dr. Dipankar Roy discovers a vaccine for leprosy. The news is flashed over television and overnight, an ...

The story of Paan Singh Tomar, an Indian athlete and seven-time national steeplechase champion who becomes one of the most feared dacoits in Chambal Valley after his retirement.

An experienced investigator confronts several conflicting theories about the perpetrators of a violent double homicide.

The intrigue of the Shakespearean tragedy 'Macbeth' is transposed to the Mumbai underworld.

A young man who survives a disaster at sea is hurtled into an epic journey of adventure and discovery. While cast away, he forms an unexpected connection with another survivor: a fearsome Bengal tiger.

A couple from Chandni Chowk aspire to give their daughter the best education and thus be a part of and accepted by the elite of Delhi.

A mistaken delivery in Mumbai's famously efficient lunchbox delivery system connects a young housewife to an older man in the dusk of his life as they build a fantasy world together through notes in the lunchbox.

A moving portrayal of the 2006 train bombings in Mumbai, this Indian drama follows the interconnected stories of several strangers.