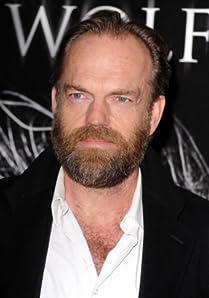 Hugo Wallace Weaving was born on April 4, 1960 in Nigeria, to English parents Anne (Lennard), a tour guide and teacher, and Wallace Weaving, a seismologist. Hugo has an older brother, Simon, and a younger sister, Anna, who both also live and work in Australia. During his early childhood, the Weaving family spent most of their time traveling between Nigeria, Great Britain, and Australia. This was due to the cross-country demands of his father's job in the computer industry. Later, during his teens, Hugo spent three years in England in the seventies attending Queen Elizabeth's Hospital School in Bristol. There, he showed early promise in theater productions and also excelled at history, achieving an A in his O-level examination. He arrived permanently in Australia in 1976 and finished his education at Knox Grammar School, Sydney. He graduated from NIDA (National Institute of Dramatic Art), a college well-known for other alumni such as Mel Gibson and Geoffrey Rush, in 1981. Since then, Hugo has had a steadily successful career in the film, television, and theater industries. However, he has illustrated that, as renowned as he is known for his film work, he feels most at home on stage and continually performs in Australian theater productions, usually with the Sydney Theater Company. With his success has also come extensive recognition. He has won numerous awards, including two Australian Film Institute Awards (AFI) for Best Actor in a Leading Role and three total nominations. The AFI is the Australian equivalent of an Academy Award, and Hugo won for his performances in Proof - Blindes Vertrauen (1991) and Das Interview (1998). He was also nominated for his performance in Priscilla - Königin der Wüste (1994). He garnered the Best Acting prize for Das Interview (1998) at the Montreal Film Festival in 1998 in addition to his AFI Award and, that same year, won the Australian Star of the Year. More recently, roles in films such as The Matrix trilogy as Agent Smith and The Lord of the Rings trilogy as Lord Elrond have considerably raised his international profile. His famous and irreplaceable role in The Matrix movies have made him one of the greatest sci-fi villains of the Twenty-first Century. With each new film, television, or theatrical role, Hugo continues to surpass his audience's expectations and remains one of the most versatile performers working today. He resides in Australia and has two children with partner Katrina Greenwood. Though Hugo and Katrina have never married, they've been a committed couple for over 25 years; while Hugo was quoted as saying marriage "petrified" him in the 1990s, by middle of the following decade he said he no longer felt that way, and that he and Katrina have toyed with the idea of marrying "when we're really old". - IMDb Mini Biography By: Lady Nephthys

Amazon Video has the most number of Hugo Weaving’s flixes, followed by Vudu compared to other streaming platforms. See the full graph below.

On average the IMDB score of the movies that Hugo Weaving has worked on is 6.7.

In a future British tyranny, a shadowy freedom fighter, known only by the alias of "V", plots to overthrow it with the help of a young woman.

Based on the Patrick Melrose Novels by Edward St. Aubyn.

Documentary
In the Company of Actors (2007)

Within the world of theatre the rehearsal room is a sacred space -- the private domain where boundaries are pushed, risks taken, mistakes made, vulnerabilities exposed and, at its very best...

Comedy,Music
The Adventures of Priscilla, Queen of the Desert (1994)

Two drag performers and a transgender woman travel across the desert to perform their unique style of cabaret.

An exploration of how the actions of individual lives impact one another in the past, present and future, as one soul is shaped from a killer into a hero, and an act of kindness ripples across centuries to inspire a revolution.

Neo and his allies race against time before the machines discover the city of Zion and destroy it. While seeking the truth about the Matrix, Neo must save Trinity from a dark fate within his dreams.

The life of a blind photographer who is looked after by a housekeeper is disrupted by the arrival of an agreeable restaurant worker.