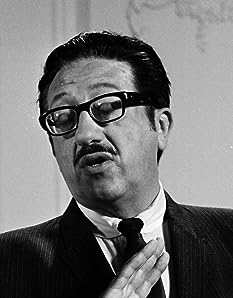 Although versatile character actor and voice extraordinary Henry Corden will forever be associated with, and fondly remembered for, providing the bellicose, gravel-toned rasp of cartoon immortal Fred Flintstone, he enjoyed a long and varied career prior to this distinction, which took up most of his later years. Born in Montreal, Canada, on Tuesday, January 6th, 1920, Henry's family moved to New York while he was still a child.Henry received his start on stage and radio before heading off to Hollywood in the 1940s. He made his film debut as a minor heavy in the Danny Kaye vehicle The Secret Life of Walter Mitty (1947) as Boris Karloff's bestial henchman, and continued on along those same lines, often in un-billed parts. A master at dialects, he was consistently employed as either an ethnic Middle Eastern villain or some sort of streetwise character (club manager, salesman) in 1950s costumed adventures and crime yarns, both broad and serious.He seldom made it into the prime support ranks, however, with somewhat insignificant parts in Abbott and Costello in the Foreign Legion (1950), The Asphalt Jungle (1950), Viva Zapata! (1952), Scaramouche (1952), I Confess (1953), King Richard and the Crusaders (1954), Jupiter's Darling (1955) and The Ten Commandments (1956). On TV he could regularly be found on both drama ("Perry Mason," "The Untouchables") and light comedy ("My Little Margie," "Mister Ed"). A heightened visibility on TV included playing Barbara Eden's genie father on the popular sitcom "I Dream of Jeannie," and the contentious landlord "Mr. Babbitt" on "The Monkees."Henry made a highly lucrative move into animation in the 1960s supplying a host of brutish voices on such cartoons as "Johnny Quest," "The Jetsons,", "Secret Squirrel," "Atom Ant," "Josie and the Pussycats" and "The Harlem Globetrotters." A well-oiled talent for Hanna-Barbera, he reached his zenith after inheriting the voice of the studio's beloved, boorish Flintstone character after the shows original vocal owner, Alan Reed, passed away in 1977. Corden would go on to give life to Flintstone for nearly three decades on various revamped cartoon series, animated specials and cereal commercials. He was performing as Flintstone, in fact, until about three months prior to his death of emphysema at the age of 85 on Wednesday, May 19th, 2005. Married four times, he was survived by wife Angelina, his two children from his first marriage, and three stepchildren from his last union. Unlike the crass guys and gruff villains he tended to articulate on film and TV, Henry was actually a very humble & modest man, well loved and respected by friends, family and peers. - IMDb Mini Biography By: Gary Brumburgh / gr-home@pacbell.net

Amazon Video has the most number of Henry Corden’s flixes, followed by Boomerang compared to other streaming platforms. See the full graph below.

On average the IMDB score of the movies that Henry Corden has worked on is 6.9.

A modern continuation of the original Tom and Jerry cartoon, where the cat-and-mouse duo are now close friends through a series of adventures and chaos.

Thundarr the Barbarian and his companions Ookla the Mok and Princess Ariel wander a devastated future Earth and fight evil wherever they find it.

Action,Animation,Family
Challenge of the Superfriends (1978)

The Justice League of America battles the plots of the supervillian team, the Legion of Doom.

Hosted by Fred Flintstone, this show featured a repackaging of The Flintstone Comedy Hour, Goober and the Ghost Chasers, Jeannie, Partridge Family 2200 A.D., The Pebbles and Bamm-Bamm Show and Yogi's Gang.

Searching for the vile Tormak, the despot responsible for the deaths of his parents, Galtar aligned himself with beautiful princess Goleeta and her feisty younger telekinetic brother Zorn. ...

The globe-trotting adventures of a group of teenage spies masquerading as a rock-and-roll band.

Just when you thought TV was finally "civilized," it's back to the Stone Ages for a brand new series featuring the entire Flintstone gang! Join the fun in the town of Bedrock with this ...