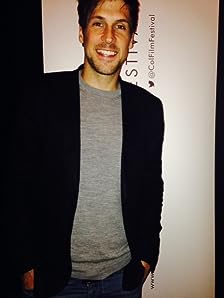 Giles was born in Harrogate, Yorkshire, UK. He has recently directed 'The Dare', 'Knights of Camelot' 'World of Darkness' and 'Food For Thought' and produced 'A Serial Killers Guide To Life' and 'Cassette' feature films. He starred in the films, I Want Candy, The Torment, The Harsh Light of Day, The Damned United and is the founder Figi Productions where he has produced and directed eight award winning films including, 'The Heart of the Forest', '47 Cleveland' 'Taken' 'Barry Brown' and the first 3D short drama to be filmed in the UK 'Sportsday 3D'. He is now in prep for his drama feature 'The Nobodies' and is in the edit 'Knights of Camelot' and soon to be released his writing and directing debut; the psychological horror feature 'The Dare' which won the Audience Award at Popcorn Frights Film Festival, starring Richard Brake, Alexandra Evans, Richard Short, Bart Edwards and Robert Maaser for Millennium Films and B2Y.After he gained a 2:1 at The University in Hertfordshire he trained at Drama Studio London. His first major role was playing Carl in Ealing Studio's 'I Want Candy', with Mackenzie Crook and Tom Burke. Since he has played the lead in the British horror, 'The Torment' (released as 'The Possession of David O'Reilly' in the US). He also was the lead in The Harsh Light of Day'. Other films include: 'Between Two Worlds', 'The Banksy Job', 'Hero', 'Tales of The Supernatural' and the Zombie Comedy 'Stalled'. He played Coin Todd in 'The Damned United' for BBC Films with Michael Sheen, Timothy Spall and Jim Broadbent, directed by Tom Hooper (The Kings Speech). Dorian in 'Walking with the Enemy' with Ben Kingsley. He played the lead role of Vincent in vampire feature 'Night Junkies', Joel in 'Three Minutes Moments, and FBI Agent Kyle Fraser in the sci-fi film 'LVJ'. He also played the popular role of Steve, the cult loving and troubled character on the BAFTA nominated, London based interactive drama series 'KateModern', The show won a Webby and a Press Guild award winner for innovation in broadcasting and was nominated for three BAFTA's. His character also crossed over to the American sister show 'LonelyGirl15' for a season. TV includes: Blackpool, Coronation Street, The Great War, Tricks, 50 Ways, The Silence and Accidental Farmer.He is a member of The Soho Theater and The Royal Court Theaters Young Writers program, where he has had three of his plays read, two of which, White and Cracking Up where fully performed at Off West End theaters. His latest play On The Tiles had a performance at The Prince of Wales Theater in London's West End. He plays football for Arsenal Ex Pros and Celebrities Charity XI and was top goal-scorer in 2018 and 2019 . - IMDb Mini Biography By: Giles Alderson

Amazon Video has the most number of Giles Alderson’s flixes, followed by Google Play Movies compared to other streaming platforms. See the full graph below.

On average the IMDB score of the movies that Giles Alderson has worked on is 5.8.

Through original diaries, letters, and memoirs, this unforgettable documentary tells how the lives of regular British men and women were transformed by the Great War. Along with historical ...

Inspired by the life and times of the Caribbean war hero, judge and diplomat Ulric Cross spanned key moments of the 20th Century like WW2, African independence movements and Black Power.

An in-depth look into how the World of Darkness and Vampire: The Masquerade created a phenomenon in the 1990's - a zeitgeist that helped shape film, literature, fashion, club culture, and ultimately fans, whose lives it forever altered.

A featuring documentary exploring the infamous theft of street artist Banksy's sculpture, 'The Drinker' and the ensuing battle with the art terrorist: AK47.

Richard is in love with Jane; Alex likes Kyle; Kyle's ex-wife Elizabeth is back in town; Elizabeth is guiding Richard's love-life; Richard's ex-girlfriend, Alex, finds about the novel he's writing.

An ex-soldier and his wife witness a brutal murder during their camping holiday, and find themselves hunted by the killers. However, the former soldier has plans of his own... As darkness ...

A self-help addict unwittingly finds herself on a killing spree with her unhinged life coach.

A rare family night for Jay takes a brutal twist when he awakens in a basement with three other prisoners. As their vengeful captor runs riot, Jay engages in a twisted battle to solve the puzzle to his past and save his family's future.