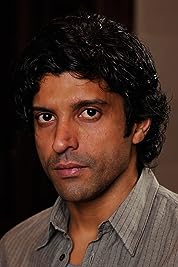 An accomplished and award-winning producer-director-writer-actor-singer, Farhan Akhtar is the ultimate Bollywood multi-hyphenate. Born in 1974 to prolific Indian film writer and poet, Javed Akhtar and writer-director, Honey Irani , Farhan was raised in an environment where creativity and originality of thought were encouraged. This has made him a maverick whose films reflect refreshingly new content that easily strikes a chord with filmgoers.In 1999, Farhan collaborated with Ritesh Sidhwani, a friend who shared his passion for good cinema, to form Excel Entertainment, a production banner that has become synonymous with excellence in film-making.Debuting at the age of 26, as a writer, director, and producer with Dil Chahta Hai (2001) a coming-of-age film that has gained cult status, Farhan came to be lauded for his honest, path-breaking writing and his ability to extract mature performances from his cast. The film won Farhan his first National Award for 'Best Hindi Feature Film' along with Filmfare awards for 'Best Feature Film - Critics Choice' and 'Best Screenplay'.Almost two decades later, this film continues to influence a generation of filmmakers.Seven years after his dream debut as a writer-director, Farhan debuted as an actor-singer in Rock On!! (2008) Yet another runaway success, the film secured him a second National Award for 'Best Hindi Feature Film' and a Filmfare award for 'Best Debut Performance'.The dream run continued with Man lebt nur einmal (2011) which released in 2011 to much popular and critical acclaim, winning him three Filmfare awards for 'Best Film', 'Best Actor in a supporting role' and 'Best Dialogue'.His next, a biopic on Indian athlete Milkha Singh, popularly known as 'the Flying Sikh', was entitled Der Lauf seines Lebens: The Flying Sikh (2013).He essayed the role with such integrity that it set the standard for other actors considering to play titular protagonists in biopics. Deservingly, Farhan swept all awards that year for 'Best Actor' as did the film for 'Best Film'. It also claimed the National award for 'Best Popular Film providing Wholesome Entertainment.'His most recent release The Sky Is Pink (2019) premiered at the Toronto International Film Festival and received a 15-minute standing ovation from the audience at the Roy Thomson Hall.In addition to his contribution to Indian cinema, Farhan has initiated and supported a plethora of social causes. In 2012, he founded MARD (Men against Rape & Discrimination), an initiative that raises awareness about gender-related issues amongst the youth of India. Recognizing his sustained efforts, Farhan was made the first male UNwomen goodwill ambassador (South Asia) in 2014.Additionally, Farhan feeds his passion for music by writing, composing and performing live with his band FarhanLive.His English language debut album 'Echoes' released in March 2019 to critical acclaim.He has 2 daughters and lives in Mumbai, India. - IMDb Mini Biography By: Excel Entertainment

Netflix has the most number of Farhan Akhtar’s flixes, followed by YouTube compared to other streaming platforms. See the full graph below.

On average the IMDB score of the movies that Farhan Akhtar has worked on is 6.7.

The truth behind the ascension of Milkha Singh who was scarred because of the India-Pakistan partition.

Three friends decide to turn their fantasy vacation into reality after one of their friends gets engaged.

Three inseparable childhood friends are just out of college. Nothing comes between them - until they each fall in love, and their wildly different approaches to relationships creates tension.

A coming-of-age story based on the lives of street rappers in Mumbai.

An aimless, jobless, irresponsible grown man joins the army and matures into a battlefield hero.

Four friends reunite to relive their moments of glory as a rock band.

Based on the love story of a couple spanning 25 years and told through the lens of their spunky teenage daughter Aisha Chaudhary, who was diagnosed with pulmonary fibrosis.