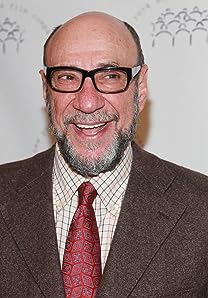 Academy Award-winning actor F. Murray Abraham was born on October 24, 1939 in Pittsburgh, Pennsylvania and raised in El Paso, Texas. His father, Frederick Abraham, was from an Assyrian Christian (Antiochian) family, from Syria. His mother, Josephine (Stello) Abraham, was the daughter of Italian immigrants. Born with the first name "Murray", he added an "F." to distinguish his stage name.Primarily a stage actor, Abraham made his screen debut as an usher in the George C. Scott comedy Der verkehrte Sherlock Holmes (1971). By the mid-1970s, Murray had steady employment as an actor, doing commercials and voice-over work. He can be seen as one of the undercover police officers along with Al Pacino in Sidney Lumet's Serpico (1973), and in television roles including the villain in one third-season episode of Einsatz in Manhattan (1973). His film work of those years also included the roles of a cabdriver in Das Nervenbündel (1975), a mechanic in Die Sunny-Boys (1975), and a police officer in Die Unbestechlichen (1976).Beyond these small roles, Abraham continued to do commercials and voice-over work for income. But in 1978, he decided to give them up. Frustrated with the lack of substantial roles, Abraham said, "No one was taking my acting seriously. I figured if I didn't do it, then I'd have no right to the dreams I've always had". His wife, Kate Hannan, went to work as an assistant and Abraham became a "house husband". He described, "I cooked and cleaned and took care of the kids. It was very rough on my macho idea of life. But it was the best thing that ever happened to me". Abraham appeared as drug dealer Omar Suárez alongside Pacino again in the gangster film Scarface (1983). He also gained visibility voicing a talking bunch of grapes in a series of television commercials for Fruit of the Loom underwear.In 1985 he was honored with as Academy Award for Best Performance by an Actor in a Leading Role for the acclaimed role of envious composer Antonio Salieri in Amadeus (1984), an award for which Tom Hulce, playing Mozart in that movie, had also been nominated. He was also honored with a Golden Globe for Best Performance by an Actor in a Motion Picture - Drama, among other awards, and his role in the film, is still considered to be his most iconic as the film's director Milos Forman inspired the work of the role with Abraham's wide range of qualities as a great stage and film actor.After Amadeus, he next appeared in Der Name der Rose (1986), in which he played Bernardo Gui, nemesis to Sean Connery's William of Baskerville. In the DVD audio commentary, his director on the film, Jean-Jacques Annaud, described Abraham as an "egomaniac" on the set, who considered himself more important than Sean Connery, since Connery did not have an Oscar. That said, the film was a critical success. Abraham had tired of appearing as villains and wanted to return to his background in comedy, as he also explained to People Weekly magazine in an interview he gave at the time of its release. - IMDb Mini Biography By: Pedro Borges

Amazon Video has the most number of F. Murray Abraham’s flixes, followed by Google Play Movies compared to other streaming platforms. See the full graph below.

On average the IMDB score of the movies that F. Murray Abraham has worked on is 6.5.

The life, success and troubles of Wolfgang Amadeus Mozart, as told by Antonio Salieri, the contemporaneous composer who was insanely jealous of Mozart's talent and claimed to have murdered him.

A bipolar CIA operative becomes convinced a prisoner of war has been turned by al-Qaeda and is planning to carry out a terrorist attack on American soil.

Three-part documentary exploring the long-term causes of the horrific events of 9/11, beginning in the early nineties.

A writer encounters the owner of an aging high-class hotel, who tells him of his early years serving as a lobby boy in the hotel's glorious years under an exceptional concierge.

The owner of a successful video game design company and his troubled staff struggle to keep their hit game 'Mythic Quest' on top.

Biography,Documentary
Every Act of Life (2018)

The Hans Christian Andersen classic is given present-day relevance and an upbeat ending in this story of Angela, a homeless child who sells match sticks to survive. Starring the voice of Academy Award® winner F. Murray Abraham.