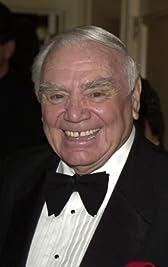 Ernest Borgnine was born Ermes Effron Borgnino on January 24, 1917 in Hamden, Connecticut. His parents were Anna (Boselli), who had emigrated from Carpi (MO), Italy, and Camillo Borgnino, who had emigrated from Ottiglio (AL), Italy. As an only child, Ernest enjoyed most sports, especially boxing, but took no real interest in acting. At age 18, after graduating from high school in New Haven, and undecided about his future career, he joined the United States Navy, where he stayed for ten years until leaving in 1945. After a few factory jobs, his mother suggested that his forceful personality could make him suitable for a career in acting, and Borgnine promptly enrolled at the Randall School of Drama in Hartford. After completing the course, he joined Robert Porterfield's famous Barter Theatre in Abingdon, Virginia, staying there for four years, undertaking odd jobs and playing every type of role imaginable. His big break came in 1949, when he made his acting debut on Broadway playing a male nurse in "Harvey".In 1951, Borgnine moved to Los Angeles to pursue a movie career, and made his film debut as Bill Street in The Whistle at Eaton Falls (1951). His career took off in 1953 when he was cast in the role of Sergeant "Fatso" Judson in Most és mindörökké (1953). This memorable performance led to numerous supporting roles as "heavies" in a steady string of dramas and westerns. He played against type in 1955 by securing the lead role of Marty Piletti, a shy and sensitive butcher, in Marty (1955). He won an Academy Award for Best Actor for his performance, despite strong competition from Spencer Tracy, Frank Sinatra, James Dean and James Cagney. Throughout the 1950s, 1960s and 1970s, Borgnine performed memorably in such films as Fényes esküvö (1956), Zebra kutatóbázis (1968) and Az Észak császára (1973). Between 1962 and 1966, he played Lt. Commander Quinton McHale in the popular television series McHale's Navy (1962). In early 1984, he returned to television as Dominic Santini in the action series Airwolf (1984) co-starring Jan-Michael Vincent, and in 1995, he was cast in the comedy series The Single Guy (1995) as doorman Manny Cordoba. He also appeared in several made-for-TV movies.Ernest Borgnine has often stated that acting was his greatest passion. His amazing 61-year career (1951 - 2012) included appearances in well over 100 feature films and as a regular in three television series, as well as voice-overs in animated films such as Charlie - Minden kutya a mennybe jut 2. (1996), Chipkatonák (1998), and a continued role in the series Spongyabob Kockanadrág (1999). Between 1973 until his death, Ernest was married to Tova Traesnaes, who heads her own cosmetics company. They lived in Beverly Hills, California, where Ernest assisted his wife between film projects. When not acting, Ernest actively supported numerous charities and spoke tirelessly at benefits throughout the country. He has been awarded several honorary doctorates from colleges across the United States as well as numerous Lifetime Achievement Awards. In 1996, Ernest purchased a bus and traveled across the United States to see the country and meet his many fans. On December 17, 1999, he presented the University of North Alabama with a collection of scripts from his film and television career, due to his long friendship with North Alabama alumnus and actor George Lindsey (died May 6, 2012), who was an artist in residence at North Alabama.Ernest Borgnine passed away aged 95 on July 8, 2012, at Cedars-Sinai Medical Center in Los Angeles, California, of renal failure. He is survived by his wife Tova, their children and his younger sister Evelyn (1926-2013) - IMDb Mini Biography By: <garyrick96@hotmail.com>

Amazon Video has the most number of Ernest Borgnine’s flixes, followed by Vudu compared to other streaming platforms. See the full graph below.

On average the IMDB score of the movies that Ernest Borgnine has worked on is 6.0.

The late Australian actor Rod Taylor, whose most recent role is in Quentin Tarantino's Inglourious Basterds, was a versatile and popular leading man, equally adept at romantic comedy, ...

Exactly what the name implied celebrities participate in a regulation game of bowling.

A television special celebrating the world premiere of "Saturday Night Fever" at Mann's Chinese Theatre in Hollywood on December 14 1977.

Action,Drama,History
The Last Days of Pompeii (1984)

The different aspects of life in Pompeii, a coastal luxury resort near Naples catering for the very rich of imperial Rome, mainly before but culminating in the eruption of the Vesuvian ...

In 1997, when the U.S. president crashes into Manhattan, now a giant maximum security prison, a convicted bank robber is sent in to rescue him.

Drama,War
All Quiet on the Western Front (1979)

A young soldier faces profound disillusionment in the soul-destroying horror of World War I.

Nine people explore a cruise ship at sea in a manner that turns their whole lives upside down.