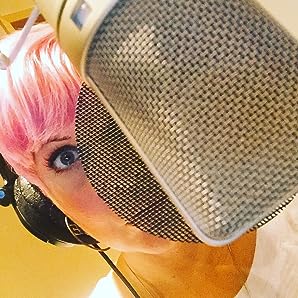 Erin Fitzgerald is a Canadian-American voice actress and actress. She is bilingual, speaking both English and French fluently. Born in Victoria, British Columbia, she has resided in Los Angeles, California since 2000.She is theater trained, having graduated from the University of Victoria's Phoenix Theaters acting program and has performed shows such as School for Scandal, A Country Wife, Macbeth, See Bob Run, Cabaret as well as performing from 1997-1998 in the Vancouver production of Tony & Tina's wedding playing Connie and Tina. She also studied Improv with the Groundlings in Los Angeles.On stage, Fitzgerald has worked with the comedy troupe "Fake Radio", performing 1940s radio plays and shows live at the Steve Allen Theater Hollywood, in authentic costumes. She is best known for her voice over roles of May Kanker and Nazz in Cartoon Network's classic original series Ed, Edd n' Eddy. Erin starred on the Mattel series Ever After High on Netflix, voicing Raven Queen, C.A. Cupid, Gus Crumb & The Ugly Stepsisters.Erin is the original voice of Abbey Bominable, Spectra Vondergeist, Rochelle Goyle, Claire (no doll), Fawn (no doll), Wydowna Spider, C.A. Cupid, Scarah Screams (2011-2014) & Astranova. Fitzgerald can also be heard on Nicktoons series Wild Grinders, as well as Lego Friends, Kate and Mim Mim, Jungle Bunch, Popples, and Miraculous: Tales of Ladybug & Cat Noir.Fitzgerald is also very well known for working on video games, which include World of Warcraft: Warlords of Draenor, The Last of Us, Bravely Default, Danganronpa, League of Legends; Skullgirls, the Annie Award 2012 Nominated game for 'Best Animated Video Game' where she voices Parasoul and the IGN, Games Radar, Destructoid, Gametrailers, & SPIKE TV VGA (Video Game Awards) 2012 "Best Fighting Game" winner Persona 4: Arena in which Erin voices Chie Satonaka. - IMDb Mini Biography By: Vox, Inc.

Apple iTunes has the most number of Erin Fitzgerald’s flixes, followed by Amazon Video compared to other streaming platforms. See the full graph below.

On average the IMDB score of the movies that Erin Fitzgerald has worked on is 6.6.

Based on the award-winning educational apps, "StoryBots Super Songs" centers on the StoryBots, the curious little creatures who live in the world beneath our screens and help answer humans' biggest questions.

Based on the award-winning educational apps, the StoryBots are curious little creatures who live in the world beneath our screens and go on fun adventures to help answer kids' questions.

Michelle is the 14-year-old daughter of the janitor of the PINY (the Piny Institute of New York), an elite high school that gives its wunderkinds cutting-edge instruction in fashion, design...

The students of all the fairytale characters attend Ever After High, where they are either Royals (students who want to follow in their parent's footsteps) or Rebels (students who wish to write their own destiny).

Yu Narukami has moved from Tokyo to Inaba to stay with his uncle and cousin, while his parents are away on business. However, after a murder shakes up the sleepy town, things get even more ...

The off-the-wall, day-to-day life of three friends who have exactly the same name.

Your favorite animals are back for an all-new family adventure! Join Maurice, the beloved penguin-tiger, and the Jungle Bunch on their quest for hidden pirate treasure!

When the boys can't compete in the Skulltimate Roller Maze Championships, Frankie Stein convinces her friends that some "ghoul power" is needed to save the day in this all-new movie!