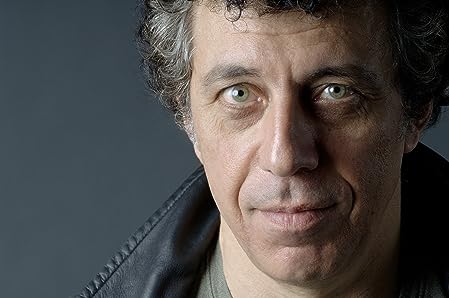 Eric Bogosian was born in Boston, Massachusetts. He attended the University of Chicago and graduated from Oberlin College in 1976, whereupon he moved to New York City. In New York he was hired by the Kitchen as an assistant, established a dance series there and after five years left to devote all his energies to his theater work. Between 1976 and 1982 Bogosian wrote, directed and/or starred in over sixteen productions Off-Off-Broadway. In 1982 he toured the Midwest with Fab Five Freddy and the Rock Steady Crew.In the early 1980's Eric Bogosian became well-known in New York for his intense one-man theater pieces, winning the Obie Award three times as well as the Drama Desk Award. In 1983, after attending one of his one-man shows, Larry Cohen cast Bogosian as the homicidal director in his low-budget "Special Effects" (1883). Four years later, Bogosian's Pulitzer-nominated play, (in which he also starred), "Talk Radio" caught the attention of the greater film world. Robert Altman cast Bogosian in his film of "The Caine Mutiny Court Martial" while producer Ed Pressman obtained the rights to the play and brought it to director Oliver Stone. Stone and Bogosian adapted the play script to film script, Bogosian again played the lead and the film of "Talk Radio" opened in December 1988. Bogosian received the prestigious "Silver Bear" at the 1989 Berlin Festival for his work on the film.After the release of "Talk Radio", Bogosian worked regularly as an actor in film and television while remaining very active in the theater. 1994 was a banner year in which Bogosian co-starred with Steven Segal in "Under Siege II" as the diabolical "Travis Dane", was featured in "Dolores Clairborne", staged another one-man show Off-Broadway and authored the play, "subUrbia" directed by Robert Falls and produced by Lincoln Center Theater, ("subUrbia" was adapted for film by director Richard Linklater). Around this time, Bogosian would also cameo appearances in Woody Allen's "Deconstructing Harry", Atom Egoyan's "Ararat", Cindy Sherman's "Office Kiler" and Mike Judge's "Beavis and Butthead Do America."In the 1990's Bogosian continued to write for film and TV, adapting his own work as well as receiving assignments from studios. He began to write for television when he was invited to co-create a show for Stephen Spielberg: "High Incident" in 1996. As an actor, in 2003, he co-starred with Val Kilmer as the notorious Eddie Nash in James Cox's "Wonderland." In 2006 he was invited onboard "Law & Order: CI" as Captain Danny Ross (where he appeared in over sixty episodes).In 2010 Bogosian starred on Broadway in Donald Margulies' "Time Stands Still" with Laura Linney, Brian Darcy James, Alicia Silverstone and Christina Ricci.In 2013 Bogosian created a website featuring his numerous monologues performed by notable actors. Visit 100monologues.com to view the complete catalog of over 75 monologues. Most recently Bogosian has landed a series of featured television roles on Netflix's "The Get Down", Showtime's "Billions" and most recently as Senator Gil Eavis on HBO's "Succession."This fall Bogosian will be featured in Josh and Benny Safdie's "Uncut Gems" (starring Adam Sandler).In addition to his numerous plays, Bogosian is the author of three novels "Mall", "Wasted Beauty" and "Perforated Heart." His non-fiction history, Operation Nemesis: The Assassination Plot that Avenged the Armenian Genocide was published by Little, Brown in 2015.He lives in New York City with his wife, director Jo Bonney. - IMDb Mini Biography By: Philip Rinaldi

Amazon Video has the most number of Eric Bogosian’s flixes, followed by Vudu compared to other streaming platforms. See the full graph below.

On average the IMDB score of the movies that Eric Bogosian has worked on is 6.7.

A feature length documentary on the acclaimed work and eclectic career of maverick filmmaker Larry Cohen.

This third Law and Order series involves the criminal justice system from the criminal's point of view.

Comedy,Documentary
To My Great Chagrin: The Unbelievable Story of Brother Theodore (2007)

He is considered to be one of the most significant links in the history of comedy, admired by such people as Eric Bogosian and Woody Allen. His television appearances have spanned from Merv...

A rude, contemptuous talk show host becomes overwhelmed by the hatred that surrounds his program just before it goes national.

Combining decades of archival material, interviews with some of comedy's biggest stars, and new footage, this is a hilarious and poignant look at the life and career of Robert Klein.

Performance artist/comedian Bogosian brings to hilarious life 10 separate oddball characters in a one-man-show. This profane, smart, crisply edited film will have you screaming for more.

A full-length adaptation, originally staged as a play, of the court-martial segment from the novel "The Caine Mutiny".

A group of suburban teenagers try to support each other through the difficult task of becoming adults.