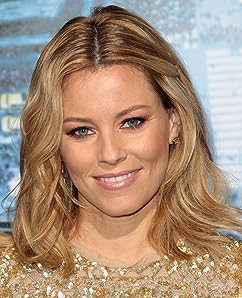 Elizabeth Banks was born Elizabeth Mitchell in Pittsfield, a small city in the Berkshires in western Massachusetts near the New York border, on February 10, 1974. She is the daughter of Ann (Wallace), who worked in a bank, and Mark P. Mitchell, a factory worker. Elizabeth describes herself as having been seen as a "goody two-shoes" in her youth who was nominated for the local Harvest Queen.Banks left home to attend college at the University of Pennsylvania--from which she graduated Magna cum Laude--and went on to attend the Advanced Training Program at the prestigious American Conservatory Theater in San Francisco, graduating in 1996. She then moved to New York and worked in the theater, and began getting small roles in films and on television. Seeking more screen work, she moved to Los Angeles and was soon cast in supporting roles. She also had to change her last name, to Banks, in order to avoid confusion with actress Elizabeth Mitchell.Her breakthrough role was as Betty Brant, the secretary of the cantankerous newspaper tycoon in Sam Raimi's Spider-Man (2002). She followed up this performance with small roles in other movies: Swept Away (2002), Steven Spielberg's Catch Me If You Can (2002), Seabiscuit (2003) and The 40 Year Old Virgin (2005). In 2003 she won the Exciting New Face Award at the Young Hollywood Awards.The winsome, beautiful Banks projected an exceptionally charming screen presence that drew comparisons to Audrey Hepburn, and Hollywood eventually began to take notice, Banks being cast in the lead in such films as Kevin Smith's Zack and Miri Make a Porno (2008) and in Oliver Stone's biopic of George W. Bush, W. (2008), as Laura Bush.In television Banks was a recurring guest star on Scrubs (2001) as Dr. Kim Briggs, the love interest of Zach Braff's J.D. In 2010 she was cast as Alec Baldwin's love interest in season four of 30 Rock (2006). Originally scheduled to appear in only four episodes, she was brought back as a recurring character for two more seasons, and earned Emmy nominations for Outstanding Guest Actress in a Comedy Series for two consecutive years.Banks has more recently appeared in such films as Our Idiot Brother (2011), Man on a Ledge (2012), What to Expect When You're Expecting (2012), People Like Us (2012), and Pitch Perfect (2012). She also won the coveted role as Effie Trinket in The Hunger Games (2012) and The Hunger Games: Catching Fire (2013).After an eleven-year courtship, Banks married Max Handelman, a sports writer and producer, in 2003. They have two sons, Felix, who was born in March 2011, and Magnus, born in Nov. 2012, both by gestational surrogacy. - IMDb Mini Biography By: Larry-115 (qv's & corrections by A. Nonymous)

Amazon Video has the most number of Elizabeth Banks’s flixes, followed by Google Play Movies compared to other streaming platforms. See the full graph below.

On average the IMDB score of the movies that Elizabeth Banks has worked on is 6.5.

An ordinary LEGO construction worker, thought to be the prophesied as "special", is recruited to join a quest to stop an evil tyrant from gluing the LEGO universe into eternal stasis.

In the 60s, Beach Boys leader Brian Wilson struggles with emerging psychosis as he attempts to craft his avant-garde pop masterpiece. In the 80s, he is a broken, confused man under the 24-hour watch of shady therapist Dr. Eugene Landy.

Action,Crime,Drama
The Next Three Days (2010)

A married couple's life is turned upside down when the wife is accused of a murder.

True story of the undersized Depression-era racehorse whose victories lifted not only the spirits of the team behind it but also those of their nation.

Beca, a freshman at Barden University, is cajoled into joining The Bellas, her school's all-girls singing group. Injecting some much needed energy into their repertoire, The Bellas take on their male rivals in a campus competition.

A holiday fable that tells the story of an elderly man discovering love for the first time.