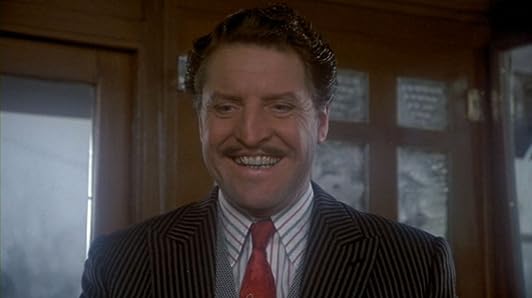 Noted British classical theatre actor Denis Quilley distinguished himself on the Shakespearean stage alongside Laurence Olivier and John Gielgud, among others. His sturdy handsomeness was slightly offset by a relatively prominent proboscis. As in the case of Jeremy Northam and Liam Neeson, it only accentuated his individuality and added a decided uniqueness of his characters.Born in London on December 26, 1927, Denis was educated at Bancroft's School in Essex. He made his London debut stage appearance in 1945 with the Birmingham Repertory Company and replaced Richard Burton in "The Lady's Not for Burning" in 1950. He followed this with roles in Shakespeare's "Twelfth Night" and "The Merchant of Venice." Quilley then took a marked departure from his classical reputation and made a resounding hit for himself in musicals and satirical revues, notably "Airs on a Shoestring" (1953) and "Grab Me a Gondola."(1956). In the early 60s Denis took his London role in "Irma La Douce" to Broadway and was met with great success.Over his nearly six-decade career, Quilley would grace the Old Vic, Royal Shakespeare, Regent's Park and Drury Lane stages in a wide range of roles. Highlights have included his Lopakhim in "The Cherry Orchard" and Claudius in "Hamlet." In the 70s he joined Laurence Olivier's National Theatre Company for its last seasons at the Old Vic. He played Jamie to Olivier's James Tyrone in "Long Day's Journey Into Night" (also a TV version), Hildy Johnson in "The Front Page" and Caliban in "The Tempest" with John Gielgud. He continued impressively in musicals winning kudos for his "Sweeney Todd" and for "La Cage Aux Folles."In 1951, Quilley was introduced to TV, with guest parts on such series as "The Black Arrow," "The March of the Peasants," "Dancers in Mourning," "The Vise" and the "BBC Sunday Night Theatre" where he portrayed Bassanio in a production of "The Merchant of Venice." In 1957, he made an uncredited movie debut in the war drama The Betrayal (1957), but did not return until given a featured role in Les chemins de la puissance (1965). Other intermittent film supports would include Show Boat (1951), Contre une poignée de diamants (1974), two Hercule Poirot whodunnits (Le crime de l'Orient-Express (1974) and Meurtre au soleil (1982)), Privates on Parade (1983), Memed My Hawk (1984), Le roi David (1985), Foreign Body (1986), Mister Johnson (1990) and Mémoire d'un sourire (1993).A familiar face on television, Quilley co-starred in three short-lived series: the crimer Contrabandits (1967), the sci-fi tale Timeslip (1970) and another crime series You're on Your Own (1975). He also appeared in a number of important mini-series: Masada (1981), A.D. (1985), Murder of a Moderate Man (1985) and his last, Cléopatre (1999).The versatile Quilley was a gifted, cerebral player who could display strength as well as vulnerability and weakness. He ended his career with the musical "Anything Goes" in 2003, the year of his death. He was survived by his actress wife Stella Quilley (nee Chapman), who died in 2007, and three children. - IMDb Mini Biography By: Gary Brumburgh / gr-home@pacbell.net

Amazon Video has the most number of Denis Quilley’s flixes, followed by DIRECTV compared to other streaming platforms. See the full graph below.

On average the IMDB score of the movies that Denis Quilley has worked on is 7.0.

Simon and Liz were teenage friends who fell into a time hole and found themselves trapped in various periods of the 20th century, where they encounter all sorts of adventures. Many of them ...

Lawrence and Feisal go to argue for Arab independence at the 1919 Paris Peace Conference.

An unemployed Indian engineer emigrates to England to find work and through a series of circumstances, ends up impersonating a doctor to win the attention of an attractive young woman.

Israel circa 1,000 B.C. The adult life of David, who would eventually become King of Israel, is presented. The blessing of the Prophets, as the voice of God, is required before the King can...