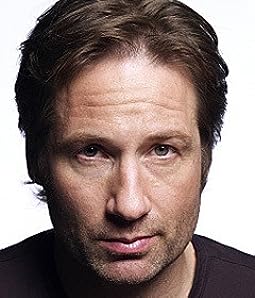 David William Duchovny was born on August 7, 1960, in New York City, New York, USA. His father, Amram Ducovny, was a writer and publicist who was from a family of Jewish immigrants (from Ukraine and Poland), and worked for the American Jewish Committee. His mother, Margaret (Miller), was a Scottish-born school teacher. David has a sister, Laurie, and an older brother, Daniel Ducovny, an award-winning director of commercials, as well as a director of photography.David earned an undergraduate degree from Princeton University, and also attended Yale University, where he undertook a Master's Degree in English Literature. A keen poet and writer, David's work was well recognized by his peers and teachers while he was in attendance at Yale. He was even nominated for a college prize by the Academy of American Poets for his outstanding work within the literary field. While at Yale, he began commuting to New York to study acting and was soon appearing in off-Broadway plays. In 1987, he abandoned his doctoral studies at Yale to pursue acting full time.Like any actor or celebrity, David began his career on the bottom, by acting in numerous commercials in the late-eighties. He crossed over into films with bit parts in low key films such as Újév fényes napja (1989) and Halálos barátság (1990). Although these parts were small and somewhat insignificant, it was a start and David was able to get his foot in the door.In 1991, David got offered the role of DEA Dennis Bryson on the acclaimed TV series, Twin Peaks (1990). He only appeared in three episodes, but at that early stage, it was his biggest claim to fame yet, as Twin Peaks (1990) was watched by millions of people worldwide. Needless to say, David's talents as an actor would finally be recognized and he would get the acknowledgment that he so richly deserved.In the early 1990s, he got more bit parts in films, this time, however, the films weren't "low key", but hits, such as Kipurcant a bébicsősz, anyának egy szót se! (1991) and the family favorite comedy, Beethoven (1992). David's role in Beethoven (1992) was small, but it was hard to forget the poor guy who was dragged across the lawn by the giant St. Bernard!A year later, in 1993, David got the lead role in the independent film Kalifornia - A halál nem utazik egyedül (1993). The film also starred another up-and-coming young actor, Brad Pitt. In Kalifornia - A halál nem utazik egyedül (1993), David played a journalist who goes on a cross-country tour of famous murder sites with his girlfriend as research for a book he is writing about serial killers. He takes Pitt's character along to help pay the bills, unaware that Pitt's character is in fact a serial killer himself. Although it did not do much business at the box office, it is still a great film and has become somewhat of a cult favorite among fans.That same year, David was offered the role of FBI Agent Fox "Spooky" Mulder on the long-running TV series X-akták (1993). The show was a tremendous international success and propelled David (and his co-star Gillian Anderson) into super-stardom. His character of Mulder has become somewhat of a pop culture legend and is renowned the world over for his satirical wit and dry sense of humor. Fans loved the fact that he could keep a straight face and still crack and joke in the face of extreme danger. David improvised a lot of his own lines of dialogue while on the show and even penned and directed a few episodes. The series ended in 2002 and still has a strong, dedicated following. To date, David has reprised his role of Fox Mulder in two "X Files" feature films: X-akták - Szállj harcba a jövő ellen (1998) and X-akták: Hinni akarok (2008).During the initial run of X-akták (1993), David kept busy and made several films, such as: Szívedbe zárva (2000), alongside actress Minnie Driver and the comedy favorite Evolúció (2001), with Julianne Moore, Seann William Scott and Orlando Jones. He even had a hysterical cameo as a self-obsessed, simple-minded hand model in the comedy-smash Zoolander, a trendkívüli (2001).In 2007, after a few years out of the limelight, David struck gold again after landing the plum role of Hank Moody in Kaliforgia (2007). The raunchy series follows the life of womanizing writer Hank Moody (Duchovny) as he tries to juggle his career and his relationship with his daughter and his ex-girlfriend. The show has become a hit for its off-the-wall humor and Duchovny's ability to always turn in a brilliant performance.It may have taken a while, but David has worked his way to the top and notched up an impressive resume along the way. We can expect to see a lot more of him in the future. - IMDb Mini Biography By: cryofry

Amazon Video has the most number of David Duchovny’s flixes, followed by Google Play Movies compared to other streaming platforms. See the full graph below.

On average the IMDB score of the movies that David Duchovny has worked on is 6.4.

A writer tries to juggle his career, his relationship with his daughter and his ex-girlfriend, as well as his appetite for beautiful women.

While most sports films celebrate the quest for a championship, "Quantum Hoops" follows a team that is searching for a single win. The documentary chronicles the final week of the 2006 ...

A recent widow invites her husband's troubled best friend to live with her and her two children. As he gradually turns his life around, he helps the family cope and confront their loss.

Mulder and Scully must fight the government in a conspiracy and find the truth about an alien colonization of Earth.

By working through problems stemming from his past, Tom Warshaw, an American artist living in Paris, begins to discover who he really is, and returns to his home to reconcile with his family and friends.

A man who falls in love with the woman who received his wife's heart must decide which woman it is who holds his heart.