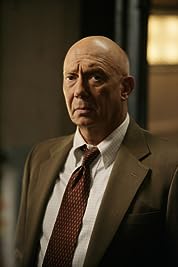 Born (May 1, 1950) and raised in Flat Rock, Michigan, the son of a chiropractor, bald-domed, serious-looking Dann Harvey Florek majored in math and physics at Eastern Michigan University. A drama scholarship, however, changed his destiny and he left the college before graduating. He moved to New York and, following training at Juilliard, traveled frequently on the late 70's/early 80's stage in plays ranging from the classics ("Love's Labour's Lost," "A Midsummer Night's Dream," "The Philanderer") to contemporary pieces ("Saints," "Bicycle Boys," "Dark Ages," "One Tiger to a Hill," "The Freak," "Winterset," "Strange Snow," "Landscape of the Body," "Chopin in Space"). Younger brother Dave Florek is also an actor.Making another big move to Los Angeles in the 1980's, Dann appeared on stage at the La Jolla Playhouse and Globe Theatre ("Big River," "The Three Cuckolds") while scouting out film and TV work. He eventually found a "working class" niche playing down-to-earth, pragmatic officials in TV crime dramas. Series credits include "Hill Street Blues," "The Equalizer," "Matlock," "21 Jump Street," Beverly Hills Buntz" and "Almost Grown." Dann also was given a recurring role on L.A. Law - Staranwälte, Tricks, Prozesse (1986) as the husband of secretary Roxanne (series' regular Susan Ruttan). He also became a durable support player and definable face in such films Eddie Macons Flucht (1983) (debut), Sweet Liberty (1986), Angel Heart (1987), Sunset - Dämmerung in Hollywood (1988) and Mond über Parador (1988).Florek would find long-term employment as Captain Cragen on the long-running cop show on Law & Order (1990). He returned to his role on a spin-off series Law & Order: New York (1999). In all, he played the supervisory role for two and a half decades. During this lengthy tenure, he found time to play on a few other series, including a regular role on the short-lived baseball comedy Hardball (1994) and as a wacky Abraham Lincoln in the irreverent comedy The Secret Diary of Desmond Pfeiffer (1998). He also was handed a recurring coach role on Smart Guy (1997). Laying low since he retired his TV character, more recent work included the theatre plays "The Front Page" (Broadway revival, 2016) and "The Joy Wheel" (2019), as well as the films Hard Rain (1998), Beautiful Joe (2000) and Santorini Blue (2013). - IMDb Mini Biography By: Gary Brumburgh / gr-home@pacbell.net

Peacock has the most number of Dann Florek’s flixes, followed by fuboTV compared to other streaming platforms. See the full graph below.

On average the IMDB score of the movies that Dann Florek has worked on is 6.3.

NYPD Detective Mike Logan, who was demoted to a beat on Staten Island after punching a corrupt politician, seeks to solve the grisly murder of a prostitute and thereby help regain his old ...

Felix and Alexandra's tender marriage unravels after a devastating betrayal. The story travels on an international journey of discovery from New York City to Santorini, Greece while addressing this very question.