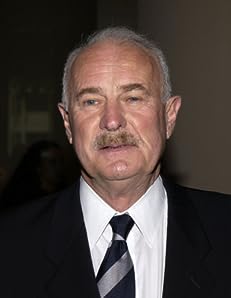 For decades, Dabney Coleman has often appeared as a smarmy, selfish, nervous person, often with money, who is mostly out for himself. He did such a good job in this type of part that he's made a career of it in film.Dabney Wharton Coleman was born in Austin, Texas, to Mary Wharton (Johns) and Melvin Randolph Coleman. He attended the Virginia Military Institute, and studied law in Texas. Coleman has a well deserved reputation as a fine character actor, and a reliable presence for almost any role in TV and movies. Dabney Coleman's early appearances in the cinema were in Stimme am Telefon (1965) and Schußfahrt (1969). On TV he starred in Süß, aber ein bißchen verrückt (1966). As the 1970s approached he became a well-known character actor in television and movies, appearing in Flammendes Inferno (1974), Schlacht um Midway (1976), and Zapfenstreich (1973). Television seemed Dabney Coleman's forum in the 1970s as Coleman played the role of Merle Jeeter in Mary Hartman, Mary Hartman (1976) and Fernwood 2 Night (1977). Coleman made appearances in the popular Die Bullen von Dallas (1979) and the Oscar-winning Melvin und Howard (1980). Dabney Coleman also became known for some satirical movies, starring in the comedy Cash Machine (1980) and snatched a lead role for the TV movie Pray TV (1981). Coleman's reputation for playing world-class jerks became cemented in 1980 as the boss to Dolly Parton , Jane Fonda and Lily Tomlin in Warum eigentlich... bringen wir den Chef nicht um? (1980). The next year, Coleman was in very good company working with legends Henry Fonda and Katharine Hepburn in Am goldenen See (1981). Coleman's hit streak would not end there.In 1982 Coleman landed a key role in the classic Tootsie (1982), further cementing his role as an unlikable wealthy boss in some capacity. In 1983 Coleman starred in the Cold War classic War Games: Kriegsspiele (1983). During this period he also found many parts in lesser known movies like Küss mich, Doc (1982) and Das Schicksal kennt kein Erbarmen (1981). In 1984 he starred in Die Muppets erobern Manhattan (1984) and in 1985 he starred with Tom Hanks in Der Verrückte mit dem Geigenkasten (1985). In 1987 the actor won an Emmy for Cold Silence (1987). In 1990 Coleman took two lead roles, one in the disastrous Die Zeit der bunten Vögel (1990), and the other in the quirky comedy Hilfe - warum bringt mich keiner um? (1990). In 1993 Coleman starred in the slapstick comedy Amos & Andrew - Zwei fast perfekte Chaoten (1993) (a very funny part) and in a remake of the TV show Die Beverly Hillbillies sind los (1993) as Milburn Drysdale. Coleman took an extensive line of TV movies, such films as Texan, In the Line of Duty, among others. Coleman took an unusual part in the ABC cartoon, Disneys Grosse Pause (1997), and then starred in a couple of big money grossers, the Tom Hanks comedy, e-m@il für Dich (1998), as Chief Quimby in Inspektor Gadget (1999), and in Stuart Little (1999), both 1999.Coleman is still very active. - IMDb Mini Biography By: Scott

Amazon Video has the most number of Dabney Coleman’s flixes, followed by Vudu compared to other streaming platforms. See the full graph below.

On average the IMDB score of the movies that Dabney Coleman has worked on is 6.3.

Documentary
Not Such a Bad Guy: Conversations with Dabney Coleman (2017)

Not Such a Bad Guy: Conversations with Dabney Coleman is a retrospective look at the storied career of character actor Dabney Coleman (9 to 5, Tootsie, War Games, Boardwalk Empire).

After three civil-rights workers are murdered in Mississippi in 1964, a team of FBI agents is sent there to find the killers.

Nick Fallin is a hotshot lawyer working at his father's ultrasuccessful Pittsburgh law firm. Unfortunately, the high life has gotten the best of Nick.

Michael Dorsey, an unsuccessful actor, disguises himself as a woman in order to get a role on a trashy hospital soap.

Biography,Documentary,Music
Dolly Parton: Here I Am (2019)

In this documentary, the life, career and music of Dolly Parton are reflected in interviews with friends and companions and the artist herself, interlaced with clips of Parton's performances.

A young man finds a back door into a military central computer in which reality is confused with game-playing, possibly starting World War III.

Three female employees of a sexist, egotistical, lying, hypocritical bigot find a way to turn the tables on him.