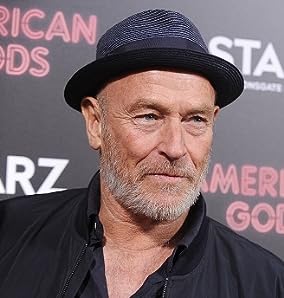 Corbin Bernsen made his initial mark on the seminal television series L.A. Law as opportunistic divorce lawyer "Arnie Becker" earning him multiple Emmy and Golden Globe nominations over the show's eight-year run. He proved along the way the role was not to be a dead-end stereotype, maintaining a steady career in both television and film over the course of three decades. Moreover, his intent devotion to his career and love for the craft has compelled him in recent years to climb into the producer/writer, and director's chair.Born in North Hollywood, California, on September 7, 1954, Corbin was raised in and around the entertainment business. The eldest of three children, his father film and television producer Harry Bernsen and mother, veteran actress Jeanne Cooper encouraged him to continue the family tradition. After high school he originally attended UCLA with the intention of pursuing law, but instead, he went on to receive a BFA in Theatre Arts and MFA in Playwriting. He worked on the Equity-waiver L.A. stage circuit as both actor and set designer, making his film debut as a bit player in his father's picture Three the Hard Way. He then set his sights on New York in the late 70s. In the early years he carved out a living as a carpenter building rooftop decks in NYC that still stand to this day. Then in 1983 he landed the role of "Ken Graham" on daytime's Ryan's Hope and he put his tool belt away. This break led to an exclusive deal with NBC and eventually the TV role in L.A. Law. The perks of his "newly-found stardom" on L.A. Law included a hosting stint on Saturday Night Live and the covers of numerous major magazines.Not one to settle for what he knew could be fleeting comfort, he worked diligently to parlay his small screen success into a diverse resume of feature film roles, both starring and supporting, often enjoying the challenge of portraying unsympathetic characters with an infusion of charm and likability. He co-starred as Shelley Long's egotistical husband in the reincarnation comedy Hello Again; played an equally vain Hollywood star in the musical comedy Bert Rigby, You're a Fool; and starred as a disorganized ringleader of a band of crooks in the bank caper Disorganized Crime. He capped the 1980s decade opposite Charlie Sheen and Tom Berenger in the box office hit Major League, which took advantage of his natural athleticism, playing ballplayer-cum-owner "Roger Dorn". Two sequels followed. Other notable feature film work includes the mystery thriller Shattered, directed by Wolfgang Peterson, which re-teamed him with Tom Berenger, Stephen Frears' Lay The Favorite, and a turn opposite Robert Downey Jr. in Shane Black's Kiss Kiss Bang Bang.On the TV front, he has appeared in many MOW's including Line of Fire: The Morris Dees Story as the famed civil rights attorney who founded the Southern Poverty Law Center. Topping it off, Corbin's title role in the horror/ thriller The Dentist for HBO had audiences developing a similar paranoia of tooth doctors as Anthony Perkins invoked decades before to motel clerks. As spurned husband-turned-crazed dentist "Dr. Alan Feinstone", Corbin reached cult horror status. The movie spawned a sequel in which he also served as a producer. Most recently, he has reunited with Dentist director Brian Yuzna on a slate of films exploring similar themes starting with "The Plastic Surgeon."More recently Bernsen wrapped eight seasons on USA Network's hit series Psych as Henry Spencer playing James Roday's retired cop father who taught his "fake psychic," crime solving son everything he knows.In 2006 he formed his own production company, Team Cherokee Productions to exert more creative control over his projects and begin exploring material both as writer, director and producer. Today that company has taken root as Home Theater Films, an early player in the Faith and Family film genre. The company has explored a wide variety of themes beginning with the film "Rust" which was distributed by Sony Pictures. With five other films under their belt, including "25 Hill," "Beyond the Heavens," "Christian Mingle" starring Lacey Chabert, and the upcoming "Jesse and Naomi," Home Theater Films has firmly carved a niche and name in this lucrative genre.Corbin has been happily married (since 1988) to British actress Amanda Pays who most recently be seen on "The Flash." They have appeared together in the sci-fi film Spacejacked and the TV-movies Dead on the Money and The Santa Trap, among others. The couple has four sons. Never one to become complacent or fall prey to the hype - a lesson learned from his mother - he still practices his carpenter skills at home as he continues to write, produce, and direct. Perseverance and dedication has played a large part in his continued success. Having a savvy take-charge approach hasn't hurt either -- characteristics worthy of many of the characters he's explored on screen. - IMDb Mini Biography By: Randy James

Amazon Video has the most number of Corbin Bernsen’s flixes, followed by Vudu compared to other streaming platforms. See the full graph below.

On average the IMDB score of the movies that Corbin Bernsen has worked on is 5.4.

A novice sleuth is hired by the Police after he cons them into thinking he has psychic powers which help solve crimes. With the assistance of his reluctant best friend, the duo take on a series of complicated cases.

Distortion is a suspense thriller about a woman who awakens from a coma after 3 months to flashes of the memory of her family's brutal murder, but without any solid memory to assist the ...

A murder mystery brings together a private eye, a struggling actress, and a thief masquerading as an actor.

Freemont Gordon isn't passionate about his successful Architecture job in Los Angeles. After he turns 30, he finds his job isn't enough and he quits and goes on a road trip. Along the way, ...

A young woman on her way to a new life in the 1800's suddenly finds herself a widow. Now she must live with a recently widowed young man and his daughter. Can any of them find love again?

The new owner of the Cleveland Indians puts together a purposely horrible team so they'll lose and she can move the team. But when the plot is uncovered, they start winning just to spite her.

In 1967, two sisters are abandoned and raised by grandparents in the town of Fireside. Humor, heartbreak and triumph are served with whipped cream and lots of local nuts in this heartwarming tale of family, friendship and forgiveness.

Christmas is supposed to be a season of love, warm feelings, and happy hearts. But with the childrens constant bickering, pretty packages and a sweet-smelling tree dont come close to ...