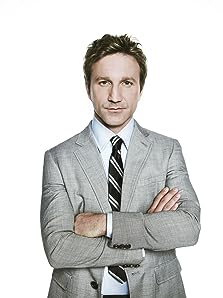 Breckin Meyer was born in Minneapolis, Minnesota, to Dorothy Ann (Vial), a travel agent, and Christopher William Meyer, a management consultant. His ancestry includes German, English, and Irish. He went to grade school with Drew Barrymore and attended Beverly Hills High School with Joshua John Miller and Branden Williams. It was Barrymore who introduced Breckin to her agent, after which he started doing commercials and the game show Child's Play (1982).After being accepted to California State University at Northridge, Breckin decided to put school on hold and pursue acting. He has always wanted to be a kindergarten teacher and may still do that in the future. Breckin was the drummer in the Streetwalking Cheetahs with his brother, Frank, which recorded a demo in 1995. He was the lead vocal on two songs, "Carnival" and "Dave". During 1995-1996, the band played about 10 gigs around Los Angeles. The Streetwalking Cheetahs' second album, "Overdrive" and their new album, "Live on KXLU", feature songs written when Breckin was still in the band. These songs include "None of Your Business", "All I Want", "Peppermint", "Thought that Crosses My Mind" and "Turn Me Down". After the Streetwalking Cheetahs, he started his own band, Bellyroom, with Seth Green and Alexander Martin, Dean Martin's grandson. They played a few gigs around Los Angeles in 1996.Breckin's friends include Ryan Phillippe, Josh Holland (USA High (1997)) and Seth Green. His best friend is Ryan Phillippe, with whom he starred in 54 (1998). Breckin was married to Deborah Kaplan, who wrote and directed Ya no puedo esperar (1998), in which Breckin had a cameo.Breckin's hobbies include playing drums, video games and sometimes sports. He's a big fan of Sean Penn, Robert De Niro, Al Pacino and Richard Dreyfuss. - IMDb Mini Biography By: Kelly Wiebe <senhue@mts.net>

Amazon Video has the most number of Breckin Meyer’s flixes, followed by Google Play Movies compared to other streaming platforms. See the full graph below.

On average the IMDB score of the movies that Breckin Meyer has worked on is 6.2.

Artist Tyler The Creator mind-melds with experts and visits factories to learn about his favorite industries then uses the knowledge to build a product of his own.

Pop culture references fly thick and fast as stop-motion animation is featured in sketches lampooning everything from television movies to comic books.

Lawyers and lifelong friends Jared Franklin and Peter Bash are recruited by a large firm's major partner after winning a high-profile case.

Aging superhero, Titanium Rex, and his has-been team known as The League of Freedom struggle to stay relevant in a changing world.

Comedy following the misadventures of four buddies who work together at a magazine.

Sci-fi stop-motion parody centering on a group of teen heroes that pilot a giant robot in order to protect the galaxy from evil.

Based on the life of Olympic hopeful Steve Prefontaine, a long distance runner who lived in Oregon and died young.

Four friends from the small Texas town of Dancer are graduating from high school and are planning to move to L.A. after graduation, taking the population of Dancer down to 77 from 81. All ...