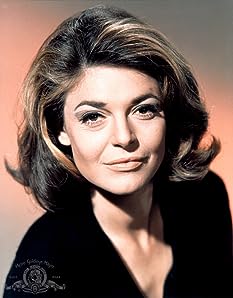 Anne Bancroft was born on September 17, 1931 in the Bronx, the daughter of Michael Italiano (1905-2001), a dress pattern maker, and Mildred DiNapoli (1908-2010), a telephone operator, both of whom were the children of Italian immigrants. She made her cinema debut in Versuchung auf 809 (1952) in 1952 and over the next five years appeared in a lot of undistinguished movies as a supporting actress, such as Der Würger von Coney Island (1954), Pantherkatze (1955) and Das Mädchen mit den schwarzen Strümpfen (1957). By 1957 she had grown dissatisfied with the roles she was getting, left the film industry and spent the next five years doing plays on Broadway. She returned to the screen in 1962 with her portrayal of Annie Sullivan in Unter anderer Sonne (1962), for which she won an Oscar. Bancroft went on to give acclaimed performances in Schlafzimmerstreit (1964), Stimme am Telefon (1965), Der junge Löwe (1972), Das Nervenbündel (1975), Der Elefantenmensch (1980), Sein oder Nichtsein (1983), Zwischen den Zeilen (1987) and other movies as lead actress, but her most famous role would be as Mrs. Robinson in Die Reifeprüfung (1967). Her status as the predatory "older woman" in the film is iconic, although in real life she was only eight years older than Katharine Ross and six years older than Dustin Hoffman. Bancroft would later express her frustration over the fact that the film overshadowed her other work. Selective for much of her intermittent career, she appeared on the screen more frequently in the '90s, playing a range of characters in such films as Love Potion No. 9 - Der Duft der Liebe (1992), Codename - Nina (1993), Familienfeste und andere Schwierigkeiten (1995), Die Akte Jane (1997), Große Erwartungen (1998) and Die Villa (2000). She also started to make some TV films, including Deep in My Heart (1999) for which she won an Emmy. Sadly, on June 6, 2005, Bancroft passed away at the age of 73 from uterine cancer. Her death surprised many, as she had not revealed any information of her illness to the public. Among her survivors was her husband of 41 years, Mel Brooks, and her only child, Max Brooks, who was born in 1972. Her final film, the animated feature Delgo (2008), was released posthumously in 2008 and dedicated to her memory. - IMDb Mini Biography By: Volker Boehm

Amazon Video has the most number of Anne Bancroft’s flixes, followed by Vudu compared to other streaming platforms. See the full graph below.

On average the IMDB score of the movies that Anne Bancroft has worked on is 6.7.

A Victorian surgeon rescues a heavily disfigured man who is mistreated while scraping a living as a side-show freak. Behind his monstrous façade, there is revealed a person of kindness, intelligence and sophistication.

Tony Award-winning actor and playwright Harvey Fierstein re-creates his role as the unsinkable Arnold Beckoff in this film adaptation of the smash Broadway play TORCH SONG TRILOGY. A very ...

What would you do if someone you loved sat down with you one night and calmly told you that they were going to end their life before morning? This is Thelma Cates' dilemma. Her daughter, ...

Tales of a group of siblings who are forced to fend for themselves when they are abandoned by their mother in the parking lot of a shopping mall. They eventually meet their grandmother, a ...

True story of a transatlantic business correspondence about used books that developed into a close friendship.

The movie, adapted from Allan Gurganus' 1989 book of the same name, chronicles the life of Lucy Marsden, a ninety-nine-year-old North Carolina woman who, at the age of fourteen, married a ...