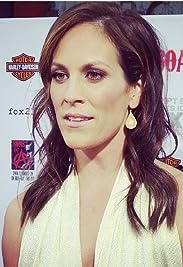 A versatile actress, Annabeth Gish weathered the transition from child actor to adult, with a variety of dramatic and comedic roles on film and television.Anne Elizabeth Gish was born on March 13, 1971 in Albuquerque, New Mexico and moved with her family to Cedar Falls, at the age of two. Her parents were both teachers; her father, Robert Gish, was an English professor at the University of Northern Iowa, her mother, Judy, taught at Malcolm Price Laboratory School. Performing in community theater productions throughout her childhood, Gish began her professional acting career, at the age of eight, by appearing in a number of commercials. She made her screen debut, at the age of 13, in the teen film, Desert Bloom (1986), opposite Jon Voight, and, in following years, has found success in film and television. Gish starred in the films, Hiding Out (1987), with Jon Cryer, Mystic Pizza (1988), with Julia Roberts, and on Shag (1989), opposite Phoebe Cates and Bridget Fonda. She also played the lead role, as rape victim "Lyn McKenna", in the TV movie, When He's Not a Stranger (1989). Gish went on to graduate from Cedar Falls' Northern University High School in 1989. In addition to acting, Gish took time to focus on her academic career and attended Duke University. Studying English as well as theater, she graduated with honors, in 1993, with a BA in English.Gish returned to screens in the mid-1990s, with appearances in supporting roles, in films Wyatt Earp (1994), L'ultime souper (1995) and critical praise biopic, Nixon (1995). The next year, Gish appeared in the ensemble cast movie, Beautiful Girls (1996). On television, Gish played the younger sister of Dana Delany's character in Soeurs de coeur (1997), a epic miniseries, based on the best seller novel by Janice Woods Windle. Her other credits include the miniseries, Scarlett (1994), the short-lived Patricia Wettig's drama series Courthouse (1995), the box office bomb superhero film, Justicier d'acier (1997), a supporting role on Ashley Judd's success thriller, Double jeu (1999), and several other independent films.Most recently, Gish played "Special Agent Monica Reyes" on the cult series, X Files: aux frontières du réel (1993) (2001-2002), for which she was nominated for a Saturn Award for Best Supporting Actress on Television. She also starred in the Showtime drama, Brotherhood (2006) (2006-2008) and appeared in recurring roles on À la maison blanche (1999) (2003-2006), FlashForward (2009) (2010), Pretty Little Liars (2010) (2011-2012) and Les experts (2000) (2011-2012). In 2012, she starred on the ABC drama series, Americana (2012), as Ashley Greene's character's mother. - IMDb Mini Biography By: Alrofficial

Amazon Video has the most number of Annabeth Gish’s flixes, followed by Vudu compared to other streaming platforms. See the full graph below.

On average the IMDB score of the movies that Annabeth Gish has worked on is 6.0.

Set in an Irish neighbourhood in Providence, the series reflects around two brothers on opposite sides of the law: one a gangster (Jason Isaacs) and the other a politician (Jason Clarke).

Two detectives work together to take down a serial killer operating on both sides of the Texas-Chihuahua border.

In the early 1980s Stevo and Heroin Bob are the only two dedicated punks in conservative Salt Lake City.

A piano player at a crossroads in his life returns home to his friends and their own problems with life and love.

A group of idealistic, but frustrated, liberals succumb to the temptation of murdering rightwing pundits for their political beliefs.

Three bickering brothers who don't get along reluctantly go on a cross country road trip together to deliver a car in time for their mother's birthday.

Atlanta, 1873. It's another day (Melanie's funeral, in fact), and Scarlett is determined to win back Rhett (who's spending a lot of time with Belle Watling). First, she goes to Tara and ...