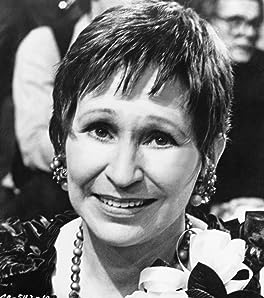 Whether portraying a glum, withering wallflower, a drab and dowdy housewife, a klutzy maid or a cynical gossip, eccentric character comedienne Alice Ghostley had the ability to draw laughs from the skimpiest of material with a simple fret or whine. Making a name for herself on the Tony-winning Broadway stage, her eternally forlorn looks later evolved as an amusingly familiar plain-Jane presence on TV sitcoms and in an occasional film or two during the 50s, 60s and 70s.Alice was born in a whistle-stop railroad station in the tiny town of Eve, Missouri, where her father was employed as a telegraph operator. She grew up in various towns in the Midwest (Arkansas, Oklahoma) and began performing from the age of 5 where she was called upon to recite poetry, sing and tap-dance. Spurred on by a high school teacher, she studied drama at the University of Oklahoma but eventually left in order to pursue a career in New York with her sister Gladys.Teaming together in an act called "The Ghostley Sisters", Alice eventually went solo and developed her own cabaret show as a singer and comedienne. She also toiled as a secretary to a music teacher in exchange for singing lessons, worked as a theater usherette in order to see free stage shows, paid her dues as a waitress, worked once for a detective agency, and even had a stint as a patch tester for a detergent company. No glamourpuss by any stretch of the imagination, she built her reputation as a singing funny lady.The short-statured, auburn-haired entertainer received her star-making break singing the satirical ditty "The Boston Beguine" in the Broadway stage revue "New Faces of 1952", which also showcased up-and-coming stars Eartha Kitt, Carol Lawrence, Hogan's Heroes co-star Robert Clary and Paul Lynde to whom she would be invariably compared to what with their similarly comic demeanors. The film version of New Faces (1954)_ featured pretty much the same cast. She and "male counterpart" Lynde would appear together in the same films and/or TV shows over the years.With this momentum started, she continued on Broadway with the short-lived musicals "Sandhog" (1954) featuring Jack Cassidy, "Trouble in Tahiti" (1955), "Shangri-La" (1956), again starring Jack Cassidy, and the legit comedy "Maybe Tuesday" (1958). A reliable sketch artist, she fared much better on stage in the 1960s playing a number of different characterizations in both "A Thurber Carnival" (1960), and opposite Bert Lahr in "The Beauty Part" (1962), for which she received a Tony nomination. She finally nabbed the Tony trophy as "featured actress" for her wonderful work as Mavis in the comedy play "The Sign in Sidney Brustein's Window" (1965).By this time Alice had established herself on TV. She and good friend Kaye Ballard stole much of the proceedings as the evil stepsisters in the classic Julie Andrews version of Cinderella (1957), and she also recreated her Broadway role in a small screen adaptation of _Shangri-La (1960) (TV)_. Although it was mighty hard to take away her comedy instincts, she did appear in a TV production of "Twelfth Night" as Maria opposite Maurice Evans' Malvolio, and graced such dramatic programs as "Perry Mason" and "Naked City", as well as the film Wer die Nachtigall stört (1962). She kept herself in the TV limelight as a frequent panelist on such game shows as "The Hollywood Squares" and "The Match Game".Enjoying a number of featured roles in such lightweight comedy fare as My Six Loves (1963) with Debbie Reynolds, Der Mann in Mammis Bett (1968) starring Doris Day, and the Joan Rivers starrer Ja, lüg' ich denn? (1978), she also had a small teacher role in the popular film version of Grease - Schmiere (1978). Alice primarily situated herself, however, on the sitcom circuit and appeared in a number of recurring 'nervous Nellie" roles, topping it off as the painfully shy, dematerializing and accident-prone witch nanny Esmeralda in Verliebt in eine Hexe (1964) from 1969-1972 (replacing the late Marion Lorne, who had played bumbling Aunt Clara), and as the batty friend Bernice in Mann muss nicht sein (1986).In 1978 Alice replaced Dorothy Loudon as cruel Miss Hannigan in "Annie", her last Broadway stand. Alice would play the mean-spirited scene-stealer on and off for nearly a decade in various parts of the country. Other musicals during this time included "Take Me Along", "Bye, Bye Birdie" (as the overbearing mother), and the raucous revue "Nunsense".A series of multiple strokes ended her career come the millennium and she passed away of colon cancer on September 21, 2007. Her long-time husband of fifty years, Italian comedic actor Felice Orlandi died in 2003. The couple had no children. - IMDb Mini Biography By: Gary Brumburgh / gr-home@pacbell.net

DIRECTV has the most number of Alice Ghostley’s flixes, followed by Pluto TV compared to other streaming platforms. See the full graph below.

On average the IMDB score of the movies that Alice Ghostley has worked on is 6.7.

The misadventures of four women and their handyman running a design firm in Atlanta, Georgia.