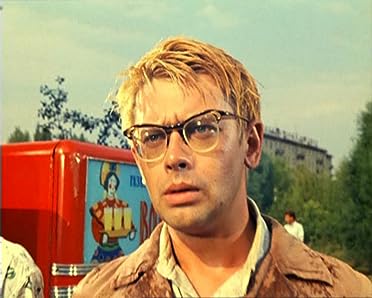 Aleksandr Sergeevich Demyanenko was born on May 30, 1937, in Ekaterinburg (Sverdlovsk), Russia. His father, named Sergei Demyanenko, was an actor in Moscow, but moved to live in Sverdlovsk in the 1930's. Young Aleksandr Demyanenko was spending much time with his father at his acting class. From the age of 9 to15 he went to Sverdlovsk Music School and studied singing and piano. He failed his entry exams at the Moscow Art Theatre in 1954, and became a student at the Law School of the Sverdlovsk University. From there Demyanenko escaped in less than a year.In 1955, Demyanenko successfully passed all acting tests and became a student at the Moscow Thatre Institute, GITIS. There he was cast for his first film work, a supporting role in 'Veter' (1958), a film by directors Aleksandr Alov and Vladimir Naumov. Demyanenko graduated from the Moscow Theatre Institute (GITIS) in 1959, and worked as an actor at the Moscow Theatre of Mayakovsky under the directorship of Andrei Goncharov. He still did not have a place to live in Moscow, and was unsettled.At that time Demyanenko played more roles in the films produced at the Lenfilm Studion in St. Petersburg (then Leningrad). There he was invited to have a permanent job as an actor with the Lenfilm Studio. The offer included an apartment. In 1961, Demyanenko moved to Leningrad, settled in a nice apartment and eventually built his 'Dacha' at the resort of Sosnovo, near Finland. He later married an assistant director from the Lenfilm Studios. He had no interest in going back to Moscow, and actually turned down many offers from the Moscow theatres and film studios.Demyanenko shot to fame after he played the leading role of 'Shurik' in 'Operatsiya Y i drugie priklyucheniya Shurika' (1965), a popular comedy by director Leonid Gaidai. His next work with Leonid Gaidai in the comedy 'Kavkazskaya Plennitsa' (1966) was even more popular. It became a huge Soviet blockbuster. Gaidai made a well-crafted film where everything works just right. Natalya Varley with the team of four men - Demyanenko as 'Shurik', and his brilliant partners Yuriy Nikulin, Georgiy Vitsin, and Evgeniy Morgunov, created a memorable acting ensemble.Demyanenko made a nice work in one of the best comedies from Leonid Gaidai, 'Ivan Vasilievich: Back to the Future'. In this film Demyanenko's character 'Shurik' builds a working Time Machine that throws a pair of Soviet jerks into the 16-th century Moscow under the Czar Ivan the Terrible. At the same time the Czar Ivan the Terrible goes into the year 1973 in the Soviet time Moscow. 'Shurik', played by Demyaneko, became a special character, that connected three comedies, directed by Leonid Gaidai.His tremendous popularity in the character of 'Shurik' came at a painful price. Demyanenko was called 'Shurik' everywhere. That image got stuck in the public perception of actor Demyanenko. He was avoided by most film directors, because of his extreme popularity in the image of 'Shurik'. At that time he suffered from alcohol dependency. He also had a heart attack, which was not treated properly at that time. He briefly worked on stage at the Akimov Theatre of Comedy. He also went back to Lenfilm Studios, where he made voice-overs in more than 100 Russian and foreign films.During his last years, from 1995-1999, Aleksandr Demyanenko worked on stage at the St. Petersburg Theatre 'Priyut Komedianta'. He died on August 22, 1999, of a heart failure, in St. Petersburg, Russia. - IMDb Mini Biography By: Steve Shelokhonov

On average the IMDB score of the movies that Aleksandr Demyanenko has worked on is 6.2.

An ordinary Soviet building manager, living in the 20th century, is extremely similar to a Tsar of All Rus' - Ivan IV the Terrible (1530-1584). He would never have known about this, but one day his neighbor created a time machine.