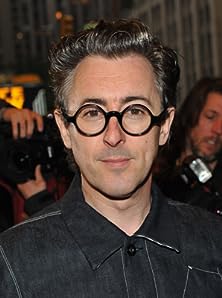 Alan Cumming was born on January 27, 1965, in Aberfeldy, Scotland, to Mary (Darling), an insurance company secretary, and Alex Cumming. His family lived nearby in Dunkeld, where his father was a forester for Atholl Estate. The family (including his brother, Tom) moved to Fassfern near Fort William, before moving to the east coast of Scotland in 1969, where Alan's father took up the position of Head Forester of Panmure Estate; it was there that Alan grew up. He went to Monikie Primary School and Carnoustie High School, where he began appearing in plays, and soon after that began working with with the Carnoustie Theatre Club and Carnoustie Musical Society.In 1981, he left high school with 8 'O' Grades and 4 Highers, but because he was too young to enter any university or drama school he worked for just over a year as a sub-editor at D.C. Thomson Publishers in Dundee. There he worked on the launch of a new magazine, "Tops", and was also the "Young Alan" who answered readers' letters. In September 1982 he began a three-year course at the Royal Scottish Academy of Music and Drama in Glasgow. He graduated in 1985 with a B.A. (Dramatic Studies) and awards for verse speaking and direction. He also had formed a cabaret double act with fellow student Forbes Masson called Victor and Barry, which went on to become hugely successful with tours (including two Perrier Pick of the Fringe seasons in London and a month-long engagement at the Sydney Opera House as part of an Australian tour), records ("Hear Victor and Barry and Faint", "Are We Too Loud?") and many TV appearances throughout the UK. Before graduating Alan made his professional theater and film debuts in "Macbeth" at the Tron Theatre in Glasgow and in Gillies MacKinnon's "Passing Glory". After graduating, Alan worked extensively in Scottish theater and television, including a stint on the soap opera Take the High Road (1980) before moving to London when "Conquest of the South Pole", a play by German playwright Manfred Karge, transferred from the Traverse Theatre in, Edinburgh to the the Royal Court in London, earning him his first Olivier award nomination for Most Promising Newcomer of 1988. Alan performed with the Royal Shakespeare Company and then the Royal National Theatre, where he starred in "Accidental Death of an Anarchist", which he also adapted with director Tim Supple. The production was nominated for Best revival at the 1991 Olivier awards and Alan won for Comedy Performance of the Year.His film career began with Ian Sellar's Prag (1992), in which he starred with Sandrine Bonnaire and Bruno Ganz. The film premiered at the 1992 Cannes film festival and went on to win him Best Actor award at the Atlantic Film Festival and a Scottish BAFTA Best Actor nomination. In the same year he made two films for the BBC - Screen Two: The Last Romantics (1992) and Bernie und der Weihnachtsgeist (1991), the latter winning him the Top Television Newcomer award at 1992 British Comedy Awards. In the 1992 Olivier awards he was also nominated for Comedy Performance of the Year for "La Bete". In 1993 he played Hamlet for the English Touring Theare to great critical acclaim ("An actor knocking on the door of greatness" - Daily Mail; ranked first and second--with his performance in "Cabaret"--in the Daily Telegraph's performances of the year) and then immediately went on to play the Emcee in Sam Mendes' revival of "Cabaret" at the same venue (London's Donmar Warehouse). He received a 1994 Olivier award nomination for Best Actor in a Musical for "Cabaret", and for Hamlet he received the 1994 TMA Best Actor award and a Shakespeare Globe award nomination.In 1994, he made his first Hollywood film, Circle of Friends - Im Kreis der Freunde (1995), and his performance as the oleaginous Sean Walsh along with those in two films released in quick succession (Jane Austens Emma (1996) and James Bond 007: GoldenEye (1995)) brought him to the attention of American producers, and he appeared in several Hollywood films, such as Romy und Michele (1997) and Buddy (1997). He returned to the UK in 1997 to work with Stanley Kubrick and the Spice Girls before returning stateside in 1998 to reprise his role in "Cabaret" on Broadway. The show and his portrayal were a sensation, and he received the Tony, Drama Desk, Outer Critics' Circle, Theatre World, FANY, New York Press and New York Public Advocate's awards for his performance. Since then he has alternated between theater and films, and also between smaller independent films and more mainstream fare. His theater work includes 2001's "Design for Living" on Broadway and the hugely successful off-Broadway "Elle" by Jean Genet, which he adapted and played the lead in 2002. His films include Julie Taymor's Titus (1999), Urbania (2000), the "Spy Kids" trilogy, Josie and the Pussycats (2001), X-Men 2 (2003), Nicholas Nickleby (2002), Die Maske 2 - Die nächste Generation (2005) and the Showtime movie musical Kifferwahn (2005).He wrote, directed, produced and acted in Beziehungen und andere Katastrophen (2001) with Jennifer Jason Leigh, which premiered at the Cannes Film festival in 2002 and went on to win a National Board of Review award and two Independent Spirit award nominations. More recently he has produced the documentary Show People (2004) and the films Sweet Land (2005) and Full Grown Men (2006) (and appears in both) and acted in Gray Matters (2006) opposite Heather Graham and Bam Bam and Celeste (2005), opposite Margaret Cho. In 2006, he returned to Broadway as Macheath in "The Threepenny Opera". He has also found the time to write a novel, "Tommy's Tale", in 2002. - IMDb Mini Biography By: www.alancumming.com

Amazon Video has the most number of Alan Cumming’s flixes, followed by Vudu compared to other streaming platforms. See the full graph below.

Alicia Florrick (Julianna Margulies) has been a good wife to her husband, a former state's attorney. After a very humiliating sex and corruption scandal, he is behind bars. She must now provide for her family and returns to work as a litigator in a law firm.

Eight short monologues were written for this series in response to the 50th anniversary of the passing of the Sexual Offences Act 1967, which decriminalized homosexual acts in private between two men aged 21 or over.

God has made a bet with the Devil: if one human of the Devil's choosing can't prove that humanity is decent, God will scrap all of creation and start over. The Devil chooses Detroit car ...

In the final fifteen years of the life of legendary director Orson Welles he pins his Hollywood comeback hopes on a film, The Other Side of the Wind, in itself a film about an aging film director trying to finish his last great movie.

In the 1970s, a gay couple fights a biased legal system to keep custody of the abandoned mentally handicapped teenager that comes to live under their roof.

Cathy Connor and Eamonn Docherty are brought up together in the East End. As the daughter of a prostitute, Madge, Cathy's life is difficult, especially when everyone assumes that she will ...

Comedy,Drama,Fantasy
Bernard and the Genie (1991)

Bernard Bottle, a mild mannered art buyer, is fired by his greedy boss, abandoned by his girlfriend and discovers a genie in an old bottle. The genie immediately embraces the modern world and helps Bernard on the side.

Animation,Comedy
Rick & Steve the Happiest Gay Couple in All the World (2007)

Welcome to the gayest of gay ghettos, West Lahunga Beach, where Rick and Steve make their fabulously decorated double-income-no-kids home. That is until Rick's lifelong lesbian friend ...